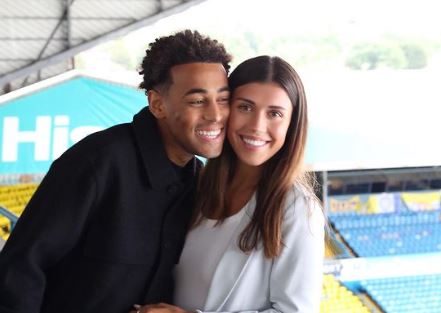 Sarah Schmidt is currently dating the American footballer Tyler Adams. Furthermore, the sources tell that Sarah and Tyler are in a long-term relationship. They began dating in 2019.

She first met Tyler in Leipzig after he signed with the German club RB Leipzig in January 2019.

The couple revealed their affair in April 2019. Adams shared a picture of his vacation to Greece with his girlfriend and captioned it, “Great trip to Greece earlier this month with my girl, and some much-needed rest. Back to Germany this week for the start of a new season.”

The couples are obsessed with each other. Both Sarah and Tyler frequently post pictures of each other very often on their social media.

Sarah is currently in Germany while her partner Tyler lives in Leeds, England. Despite being in a long-distance relationship, the couple manages time to spend together.

She also attended the unveiling ceremony of Tyler in Leeds in July 2022.

Schmidt is very private about her personal life and she hasn’t revealed any information about her parents and family.

Likewise, Sarah Schmidt finished high school in Germany and then moved to Philadelphia, the United States to attend college.

She studied at the Fox School of Business at Temple University and earned her Bachelor of Business Administration degree in International Business with a concentration in Spanish and Marketing in 2019.

The 25-year-old, Sarah is a free-spirited, independent, and honest woman. Her zodiac sign is Saggitarius, which makes her more adventurous.

Moreover, she rose to fame after being in a relationship with the Leeds midfielder Tyler Adams.

Tyler Adams was born on n 14 February 1999, in Wappingers Falls, New York, United States. His father abandoned his family and was raised by a single mother Melissa Russo.

Tyler comes from mixed ancestry as his mother was from the white ethnicity and his biological father was black.

His mother later remarried and he has three half-brothers named Darryl, Dylan, and Donovan. Darryl.

His brother Darryl currently plays football for Marist College. The passion for football runs in his stepbrother’s life too.

Moreover, After getting accepted into US Soccer’s U17 residency program, Adams continued his education at Wappinger’s Roy C. Ketcham High School and graduated in 2017.

At the age of 16, he began his professional career with the New York Red Bulls II.

On January 27, 2019, he played his first game in the Bundesliga, in a 4-0 victory over Fortuna Dusseldorf. Tyler recently joined Premier League club Leeds United on a 5-year contract for a reported fee of £20 million.

Likewise, the next year Tyler Adams scored a goal against Mexico in a friendly match.

Adams was selected for the team for the 2019 CONCACAF Gold Cup in June, but he could not play the match due to an injury.

Sarah Schmidt’s Career and Net Worth

The hot WAG currently works as a Junior Business Analyst at Red Bull Soccer International since 2021. On average, the junior business analyst earns €49,668 per year in Germany.

As she has been working in the position for more than a year, she must be earning below average which could be in the range of €40,000.

Prior to this, she did internships at SES, LONSIN Capital Ltd, and Foresters Financial Services. As an intern, she didn’t have a good income.

Schmidt’s net worth is currently under review but could be around €100,000.

On the other hand, Tyler has a total net worth of $3 million as of 2022. His major source of income is his football career, brand endorsement, etc.

Even though we have no details regarding Sarah’s life, her social media seems to tell more about her.

She is available on Social Media platforms. You can find her on Instagram as @sarah_schmidt22.

Moreover, She has over 5.6 K followers on Instagram and follows over 785 different accounts, which include various social media personalities, actors, brands, etc.

On the other hand, Sarah’s other half, Tyler Adams is very popular on Instagram as @tyler.adams.

He has over 167K followers on and follows over 556 different accounts. His Instagram page is already verified. Likewise, He also has a Wikipedia page written about him.

Some facts about Sarah Schmidt