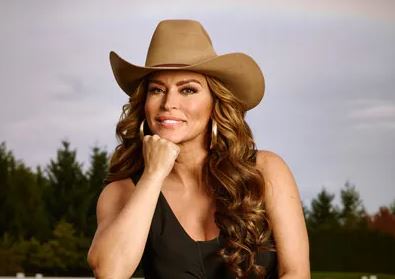 Darcy LaPier, an American former actress and model, also managed to be in the spotlight after marrying Jean-Claude Van Damme, a Belgian actor and mixed martial artist.

Alike Van Damme, LaPier has also married five times while Jean-Claude Van Damme is her third husband. She is the mother of three and is currently living a single life after the divorce from her ex-husband Brian Snodgrass.

The 5 feet 10 inches tall actress is 56 years old as of 2022 and holds an American nationality.

She attended Portland State University and after her graduation, she enrolled at the University of Oregon and Huntington Film Institute in Florida.

Married Five Times: Who are her Spouses?

Darcy LaPier’s first marriage was with Larry Ray Robertson, who she wedded in 1984. She was just 19 years old at the time of her marriage.

They soon fell in love and tied the knot in 1991. Darcy and Ron were together for 2 years and share a daughter named Sterling.

LaPier started having an affair with Jean-Claude Van Damme while she was still married to Ron. Likewise, Jean-Claude was married to Gladys Portugues.

Her former spouse Rice filed for divorce. However, the marriage was called void as she hadn’t finalized her divorce from her first husband. Darcy was granted child support and got no alimony from Rice.

LaPier and Van Damme got married in Bangkok, Thailand, in February 1994 during the filming of Street Fighter.

The next year, she was pregnant with their child and welcomed a son named Nicholas van Varenberg on October 10, 1995. The marriage did not last long as they separated in November 1997.

They had a lavish wedding ceremony and even was broadcast on HBN. However, she became a widow the next year as her husband Mark passed away in his sleep.

Darcy and Brian divorced after some years in 2010. She currently lives a single life in Oregon.

Where are her children?

Besides driving her 43-foot-long semi-truck to the rodeo, the ex-wife of Jean-Claude is also parenting her three kids.

Her oldest daughter Sterling Rice is attending business college while her son Nicolas is following his parents’ footsteps in the entertainment industry.

Darcy’s youngest Madison, who is still in her school, is very much into sports and competes in soccer, gymnastics, volleyball and even barrel racing.

Darcy’s former spouse Van Damme was married 5 times to 4 women including her. He first married Maria Rodriguez in 1980 but split in 1984.

The Street Fighter star then wedded Cynthia Derderian in 1985. They divorced after three months. His third wife is Gladys Portugues. They were married from 1987 to 1992 and also share two children.

Van Damme and Darcy were together from 1994 to 1997 and also share a child. After his divorce from his fourth wife, he reunited with his third wife Gladys and remarried her.

The Belgian actor was born on 18 October 1960. She was born in Sint-Agatha-Berchem, Brussels-Capital, Belgium, and holds Belgian nationality.

LaPier worked as a dancer and model after her graduation. She then took part in the Hawaiian Tropic Beauty Contest in 1985 representing Oregon. She was crowned the Oregon Miss Hawaiian Tropic title in 1986.

After modeling for a couple of years, she started her acting career appearing as Donna in the comedy film Think Big in 1989. She also starred in Dream Trap (1990), Driving Me Crazy (1991), and Double Trouble (1992).

Darcy also appeared in a lead role in Street Fighter playing the role of Guile’s Date where Guile was portrayed by her then-husband, Jean-Claude Van Damme.

Moreover, she was also a cast in the 1998 action film Operation Delta Force 3: Clear Target.

Darcy developed an interest in rodeos after she watched it with her father in her hometown of Oregon. She later learned barrel racing and drove 125 miles.

She even took part in the competition in 2004 and was the highest-earning rookie.

Darcy LaPier’s net worth is $10 Million which she earned as a model, actress, producer, barrel racer, etc.

The Street Fighter star has only six acting credits in her name. Her major TV appearance is as Guile’s Date in Street Fighter which earned 99.4 million USD at the box office against the budget of $35 Million.

As a model, she has worked with several brands in the promotion campaign and might have received a heavy paycheck.

Dary even produced her own show Rodeo Girls in 2013 which received a good response from the viewers. She must have earned well from the show.

Lastly, she was also into barrel racing and made the most money in 2004 as a rookie. With the earnings, she has been living a very good life.

Darcy Lynn is on Instagram as @darcylapier where she shares the photos of her barrel racing mostly.

Darcy has an amazing modeling figure with a height of 5 feet and 10 inches. She weighs 62 kg.

Her body measurements are 34-30-34. She has black hair with dark brown eyes.