Chris Tucker’s Ex-wife Azja Pryor Biography; Where is she now? 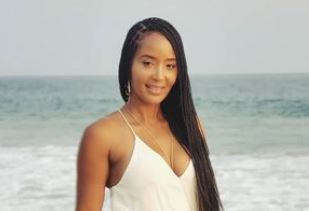 Azja Pryor is still in the limelight for being the ex-wife of Chris Tucker, an American comedian and actor. Azja is a former casting director, babywearing consultant, and also health coach.

Pryor and her former husband tied the knot in 1997 but later separated. She now lives in LA and is living a new life. Why did they divorce?

How old is Azja? (Age and Family)

Born on August 28, 1978, in Berkeley, California, Azja Pryor is 43 years old. Her mother’s name is Deborah B. Pryor but her father’s name is still unknown. She has two siblings, a brother and an older sister named Vivica.

Pryor is of mixed ethnic group and holds an Amercan nationality.

What does Azja Pryor do for a Living?

The former celebrity spouse, besides being known as Chris Tucker’s wife, is a babywearing consultant, and health coach. She must be earning a good amount from her profession. She promotes her work through Instagram with the handle @loveazja where she teaches people about healthy lifestyles and products.

Prior, she also makes money working as a marketing manager. She is a babywearing consultant too.

Azja Pryor might be earning thousands of dollars from her profession. Her net worth is around $1 Million.

She previously worked as a casting director from 2004-2006. She worked in several shows including Cuts, The 4400, One on One, and Eve.

With the earnings from various professions, she is definitely making loads of cash. She has been able to give her child a healthy and comfortable life with the earnings she makes.

While Azja was still a college student, she met Tucker while he was a struggling actor in the mid-1990s. They shared a mutual interest and started dating each other. The couple tied a knot in 1997.

Azja and her husband moved to Los Angeles after a year where Chis got a role in the movie series Rush Hour through which he got huge fame and money.

Azja then became a mother of her child and gave up her career to raise him.

Azja is a Mother of Destin Christopher with Chris

Azja and Chris became parents with the birth of their son Destin Christopher on September 13, 1998. He studied at Oaks Christian School and later completed his graduation at Atalanta. He is 23 years old currently.

Azja and her former partner Chis are currently coparenting their son and still has a good relationship.

The couple had a good life after the birth of the child but the relationship wasn’t the same as they were in the 6th year of their marital life. The couple separated in 2003 without revaling the reason of their divorce.

Who is Azja Pryor currently Married to?

Two years after her divorce from Chris, Azja revealed that she is dating an actor and rapper Brian Bridges aka Ludacris but split after a short time. She then started her relationship with Cherif A Ndiaye and later married.

Her spouse Cherif is a Senegalese fitness enthusiast and life coach. The couple welcomed a daughter named  Iman Joelle on April 16, 2017. Her husband also has two children from his past relationships.

After his divorce from Azja, Chris has several relationships that didn’t work out. He dated Mendoza, Gelila Asres, and Nia Long but did not marry. He is currently in a relationship India Arie for a long time.