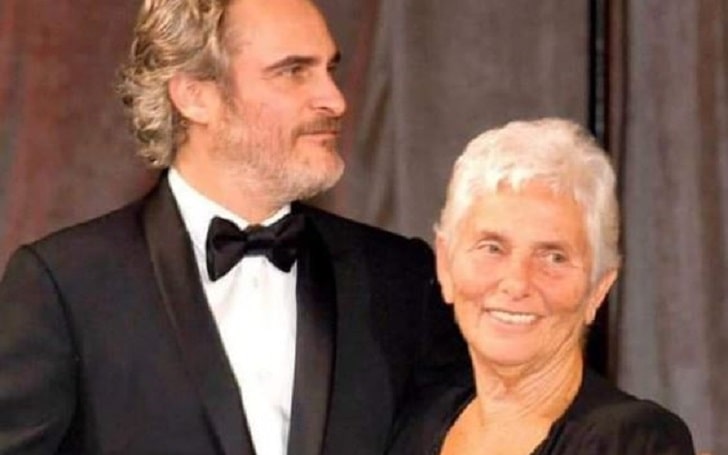 Arlyn Phoenix is an American social activist who is primarily recognized as the mother of actors Joaquin, Liberty, Summer, and River. She served as the Board President of the River Phoenix Center for Peacebuilding. Her first husband, John Lee Bottom, passed away in 2015 due to cancer.

Born on December 31, 1944, Phoenix is 76 years old now. She is a native of The Bronx, New York, born to her parents Margaret and Meyer Dunetz. The peace activist also has two sisters, Rhoda and Merle.

Phoenix holds American nationality, but her mom’s family was from Hungary, and her father’s family was from Russia. She belongs to a mixed ethnic race. Arlyn’s family was Jewish who glorified the Jewish culture and holidays, and they did not follow synagogue. In 1968, she left New York and headed west towards California.

Phoenix has been married twice in her life. She wedded to her first husband, John Lee Bottom, whom she met for the first time in California. The couple hitched on September 13, 1969. They were a part of a religious group ‘The Children of God’ for several years. Together the duo traveled to different places to spread the expression of that religious group.

Phoenix and John are the parents of five children. Their first son River was born on August 23, 1970, but he passed away on October 31, 1993, aged 23 years in West Hollywood, California, the U.S. Her other children are Rain, Joaquin, Liberty, and Summer Phoenix. All of them are actors and models. Her daughter, Liberty, is a former actress who was active in the showbiz industry from 1982 to 1986.

Apart from that, Phoenix and John ended their long-term marital relationship in 1997. After that, she married for the second time in 2001 to Jeffrey Weisberg, a producer. Now, they are spending a conjugal life, and there is no news of their separation.

The social activist worked as a secretary before moving to California in the ’60s. After getting back to California, she got a job as an executive secretary for NBC. She later hired an agent, Iris Burton, who ultimately got all of her children acting jobs. Similarly, she was the Executive Director of The Florida School of Traditional Midwifery for five years.

And in 2012, Phoenix co-founded the non-profit organization River Phoenix Center for Peacebuilding. Arlyn is on the Board of Directors of Peace Alliance. Additionally, Peace Alliance is an association that advocates the invention of the United States Department of Peace. All of her kids are well-established personalities in the film industry. Her son, Joaquin, is an actor, producer, and animal rights, activist.

Similarly, Rain is an actress, musician, and singer who has been in the industry since 1991. She has starred in numerous movies, including Amazing Stories, Family Ties, Maid to Order, To Die For, etc. Rain has shared the screen with Logan Medina and Victoria Pedretti. Phoenix’s other child, Summer, is also an actress, model, and designer. She was also a member of the rock band The Causey Way.

Arlyn Phoenix’s Net Worth In Millions

Phoenix is involved in multiple non-profit organizations from where she makes a good sum of money. Reportedly, her net worth is projected to be around $1 million. She has managed to earn that sum of money from her several jobs. Joaquin has a net worth of $50 million, and Rain also enjoys a tremendous net value of over $5 million.

Similarly, Summer’s fortune is expected to be more than $4 million, which she earned from her appearance in various moves. She is also a designer, and the average pay for a designer in the US is $61123 per year. So, all the Phoenix family lives a lavish life with great earnings.