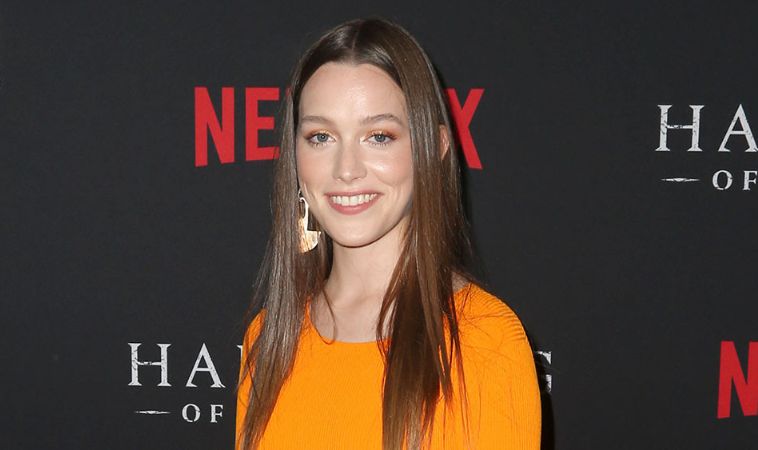 Victoria Pedretti is an American actress. She is best known for her roles as Eleanor “Nell” Crain Vance in the Netflix horror series The Haunting of Hill House and Love Quinn in Netflix thriller series You.

Pedretti is currently 25 years old. She was born on March 23, 1995, in Philadelphia, Pennsylvania, USA. Her father, Michael Pedretti, a professor, is of three-quarters Italian descent. And, her maternal grandmother was Ashkenazi Jewish. Victoria has an older sister.

The 25-year-old spent her early years in Pennsylvania and attended Pennsbury High School in Fairless Hills She then enrolled at the Carnegie Mellon University’s School of Drama in Pittsburgh and received a Bachelor of Fine Arts in acting in 2017.

Pedretti’s net worh is estimated at $1 million as of 2020. While her salary has not been disclosed, her earning could fall in the range of $50k to $90k. Netflix typically pays its actors $52,136 per year and as per PayScale, actor generally receive $47.50 per hour. Victoria started her film career in 2014 and appeared in two independent short films.

In 2018, she portrayed the main role Eleanor “Nell” Crain Vance in the Netflix horror series The Haunting of Hill House. For her performance in the show, Pedretti earned Saturn Award and MTV Award nominations.

The following year, the 25-year-old landed in a role of in Quentin Tarantino’s comedy-drama film Once Upon a Time in Hollywood. The movie was a commercially successful, grossing over $374 million on a production budget between $90 to $96 million.

Moreover, Pedretti has garnered significant recognition for her portrayal of the main character “Love Quinn” on the the Netflix thriller series You in 2019. She will reprise her role for the third season that is scheduled to release in 2021.

Her other notable fim and television credits include Amazing Stories and Shirley. Most recently, Victoria starrred as Danielle “Dani” Clayton on Netflix’s supernatural horror drama television series The Haunting of Bly Manor, which premiered on Netflix on October 9, 2020.

Is Victoria Pedretti dating someone?

Pedretti doesn’t appears to be in a romantic relationship as of now. Moreover, she has not tied the knot and, as it goes without saying, has no husband, spouse, or children.

The 25-year-old up-and-coming actress prefers to keep her love life under wraps and has not shared any details about her past relationships.

Pedretti has been compared to the 2 Broke Girls’ Kat Dennings and Lizzie McGuire’s Hilary Duff because of the striking resemblance she bears with both actresses.

“Victoria Pedretti (who plays Love) is like some sorta love child of Hilary Duff and Kat Dennings parents, right?!?!,” one fan tweeted.

Anyway, if you want know more about Victoria’s persoanl life and professional life, you can follow her on Instagram at @then0t0ri0usvip, where she currently has over 1 million followers.