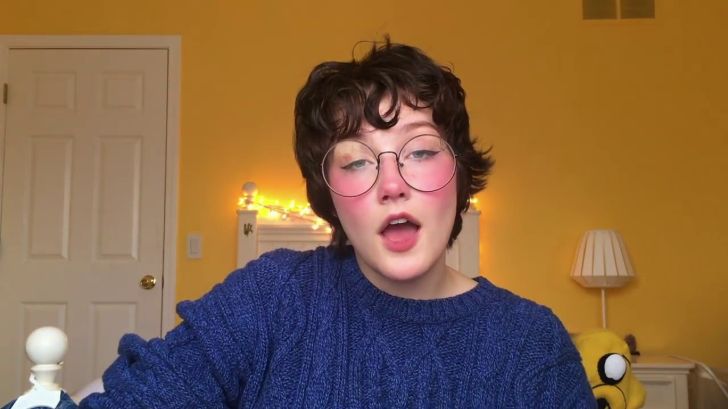 How Much Is The Net Worth Of Singer Chloe Moriondo?

American singer and songwriter Chloe Moriondo is known for uploading her music videos on YouTube. Some of her popular covers on her YouTube channel are Love is Easy, La Vie En Rose, and Dear Happy.

Besides that, Moriondo also has released her original songs: Waves and Kalmia Kid. Likewise, she has self-released her only studio album, Rabbit Hearted.

As per the report, Chloe Moriondo has an estimated net worth of $700,000 in 2020. She earns a good sum of dollars via her YouTube and Instagram.

Chloe began her YouTube journey uploading her very first video, Cup Song Remix by ItsWayPastMyBedTime in January 2014. The same year, in August, she posted her next cover song titled Love is Easy by McFly.

After that, 5 feet 3 inches tall Moriondo posted a cover of the French song, La Vie En Rose by Cristin Milioti in English. Eventually, she uploaded her first original song titled Waves in July 2017. Again, in December, she covered Radiohead’s song, Creep, and the video earned millions of views.

Finally, on July 31, 2018, Chloe released a debut studio album titled Rabbit Hearted. The next year, she sang the singles like Waves and Kalmia Kid.

Moreover, on April 24, 2020, the YouTube star released her extended play, Spirit Orb which includes songs, Kindergarten, and Ghost Adventure Spirit Orb. The same year, she sang other singles such as Manta Rays and I Want To Be With You.

Additionally, Waves singer is also active on Instagram with 628K followers. As per the Influencer Marketing Hub, she gains around $1,879.5 to $3,132.5 per sponsor post with an engagement rate of 10.13%.

Chloe Moriondo was born on September 29, 2002, in Detroit, Michigan, the United States. Except for the fact, she has a brother, Moriondo has not shared details about her family. As of 2020, she lives in Michigan with her family.

Talking about her personal life, Chloe states herself as a bi-sexual. However, the information about her relationship status or partner is yet not available.

Kalmia Kid singer has a passion for music and also talented ukulele player. Besides that, she is also an animal lover. She has a pet cat named named Kitten, gecko named Rosie, a dog named Sammy, and a snake named Taiji.