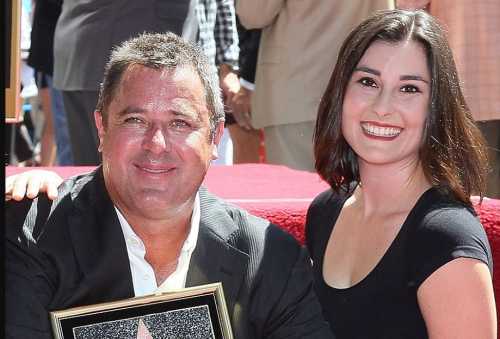 Jennifer Jerene Gill is a singer, songwriter, and movie maker. She is famous for being the daughter of American singer, Vince Gill. She is married to Josh Van Valkenburg and is the mother of two.

Jennifer is also famous for her debut album, The House Sessions, which featured some special guests.

Let’s scroll through the article till the end to know more about Jennifer’s personal details.

On 5 May, 1982, Jennifer was born in America to Vince Gill and Janis Oliver. In addition, She holds American citizenship.

Growing Up, Jenny was very passionate about music maybe because both of her parents are country musicians.

In 1993, At the age of 11, Jenny experienced the taste of recording for her dad’s Christmas album.

She vocalized “Let there be peace on Earth” with her father, which has over 1.4 million views on Youtube.

Gill was very nervous about her recording because she wanted the session to be great. To her surprise, the song turned out pretty well and she got appreciation from almost everyone.

Janis Oliver and her husband Vince Gill met each other in the early phase of their career.

Vince is famous for being the frontman of the country rock band Pure Prairie League in the 1970s and as a solo artist.

He created over 20 studio albums, had more than 40 singles chart as Hot Country Songs in the United States, and sold more than 26 million albums.

Likewise, Janis is popular for both her soulful music and for being a member of the band known as the Sweethearts of the Rodeo.

She and her sister, Kristine Arnold, embarked on a musical journey in the 80s, with the band.

They joined Columbia Records and issued four albums and twelve singles under their label.

Both singers married each other in 1980. After two years of their marriage, they gave birth to beautiful, Jennifer Jerene Gill.

Furthermore, The couple relocated to Nashville in 1983. While his wife’s fame flourished, Gill continued to write songs, perform as a session guitarist, and sing backup. On occasion, Gill would handle the sound for his wife’s group.

However, their relationship did not last long. And after being married for seventeen years, the couple decided to get a divorce.

After three years prior to the divorce, Vince married another singer, and songwriter, Amy Grant.

Vince and Amy have one biological child and three children from Amy’s previous marriage.

Jennifer’s stepmother Amy recently had a bike accident and is currently recovering from it.

Who is Jennifer Jerene Gill’s Husband?

Jenny married her childhood friend and lover, Josh Van Valkenburg on May 8, 2010. They tied the knot in her parents’ home in presence of her father and stepmother.

He has also worked with artists/songwriters like Brett Eldredge and Chase Rice.

Furthermore, Van Valkenburg recently received recognition on Variety’s list of 2020 Hitmakers, in part because of his encouragement of SMP’s contributing writers and producers on Gabby Barrett’s No. 1 single I Hope.

Both of them seem to be interested in the field of music and made a career out of what they enjoy.

They have an incredible bond and raised a happy family.

Jenny and Josh have two wonderful kids together. Her firstborn was her son and her secondborn was her daughter.

In August 2014, Jenny gave birth to a beautiful baby boy. She named him Wyatt Gill Van Valkenburg. He is 8 years old now.

Likewise, On 12 January 2018, Jenny gave birth to another baby. The couple named her, Everlyn Van Valkenburg. She is now four years old.

They also own a dog, who they treat as a baby.

How rich is Jennifer Jerene Gill?

Jennifer is estimated to have a total net worth of $2 million as of 2022.

Her primary source of Income is her Singing and songwriting career. She must also earn from her social media, youtube, brand endorsements, sponsorships, etc.

As a public figure, Jenny is available on various social media platforms, among which on Instagram she is more active and keeps sharing her personal life.

You can find her on Instagram as @realjennygill. She has over 14.7 K followers and followers on over 798 different accounts.

Moreover, you can also find her on Youtube as Jenny Gill. She has over 744 subscribers.

Some facts about Jennifer Jerene Gill