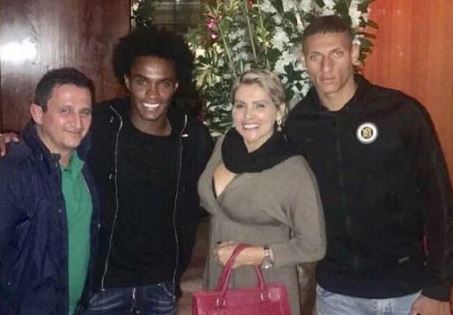 Richarlison is a Brazilian footballer who currently plays for the Premier League club Tottenham as a forward. He is also a member of the Brazilian National Team and has been included in the final squad for the FIFA World Cup 2022.

Richarlison’s fae skyrocketed in his world cup debut game against Serbia, where he scored two goals, including a stunning bicycle kick goal.

With his brilliant performance in the tournament, the former Everton player is in the race for the golden ball. Meanwhile, people are also curious about his family and parents.

Who are Richarlison’s father and mother? Know about them in detail.

Vera Lucia is the proud mother of Brazilian footballer Richarlison. She comes from a very poor family.

Vera used to work as a cleaner and ice cream seller before her son became a professional football player.

She raised him with all her effort and helped him become a successful athlete. Richarlison is her eldest child and has four more kids.

Who is Richarlison’s Father?

His father’s name is Antônio Carlos Andrade. He used to work as a stonemason while Richarlison was a child.

Antonio always inspired his son to follow his dream and struggled a lot to give a better life to his son.

The Brazilian star recently thanked his father for ‘not giving up on his dream.’ He went and embraced his father in the stands after scoring a brace on his Champions League debut game against Marseille.

He posted the photo on his Twitter and wrote:

“It was years of struggle, and you were always by my side. I just need to thank you for not giving up on me and my dream. Today, having you here, made the moment even more exciting for me. We continue together for even bigger dreams to come! Thanks Dad.”

The Brazilian forward was born on 10 May 1997 in Nova Venécia, Espírito Santo, Brazil. He holds Brazilian nationality.

His parents are Antônio Carlos Andrade and Vera Lucia. He has four younger siblings.

Richarlison grew up in a very difficult community where most of the children of his age were involved in drugs. However, he never got into those habits.

Instead, he used to sell chocolates and ice cream and help his mother.

The Tottenham star was rejected by any clubs in his early days and was close to giving up football.

He played his first professional game for América Mineiro in 2015. He also played a season each for Fluminense and Watford.

Richarlison then joined Everton from Watford and played until 2022. He scored 43 goals in 135 Premier League games for the club.

In 2022, he signed with Tottenham Hotspur for a fee of £50 million plus £10 million in potential add-ons.