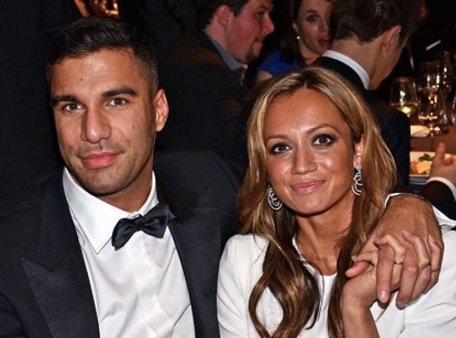 Ramtin Abdo is a businessman and real estate agent from Germany. He has co-founded a company named SMAP and is also the CEO of Ina Ventures GmbH.

He is also the husband of Kate Abdo. His wife Kate Abdo is an English sports broadcaster who currently works for CBS Sports.

Ramtin and Kate are rumored to have slit now. So, let’s get to know more about him in detail.

Ramtin Abdo was born in Berlin, Germany to German parents. Since we have no information regarding his exact date of birth, Ramtin’s age is still not public yet. However, he might be in his early forties or mid-forties.

He grew up in a Christian family. Despite being known as a real estate agent for a long time, his marriage with Kate is what rose him to fame.

Furthermore, he is the sole owner of various companies and is the CEO of Ina Venture GmBH and has also founded a company SMAP.

Ramtin Abdo and his Partner Kate Abdo still Together?

Ramtin Abdo and his wife Kate met in 2010 and soon began their relationship. After dating for a couple of months, they walked down the aisle in 2010.

According to some sources, Kate and Ramtin had some issues in their marital life and quietly parted ways. However, they denied the false allegations and revealed how much they are enjoying their married life.

The couple doesn’t appear together now. They even don’t share each other’s photos on social media. So, they probably have divorced now.

Who is Kate Abdo?

Kate was born on 8 September 1981, in Manchester. Before marrying Abdo, Kate’s maiden name was Giles.

Kate had Guyanan ancestry from her maternal grandmother.

The 41-year-old Kate has worked internationally in the United Kingdom, Spain, France, Germany, and the United States.

At the age of 17, She relocated to Spain to complete her high school education with Spanish as a major.

Kate also took time out of her studies to live in France and Germany. A year later, she started a degree at the University of Málaga where she studied “Translation and Interpreting.”

She also received a first-class B.A. (Hons) in European Languages from the University of Salford and is fluent in all three languages and has lived in Germany, France, and Spain.

She also served as a production assistant for Goal! The Bundesliga Magazine in 2006–2007, and from that time until 2009, she presented sports news for Deutsche Welle, hosting sports coverage for both their English- and German-language services.

Kate later transferred to CNN, where she was the daily host of the “World Sports” program. She also anchored the featured program “Inside Africa.”

Abdo left CNN to work for Sky Sports News HD in Germany, where she served as the network’s chief anchor and face.

Since joining Fox, she has also taken on the responsibility of anchoring Fox’s Premier Boxing Champions, which includes coverage of fight nights as well as a regular studio show called “Inside PBC Boxing.”

Abdo also agreed to host Champions League coverage on TNT from Turner’s Atlanta studios after Fox lost the rights to the competition to Turner.

Kate left Fox Sports with the loss of significant soccer rights and the discontinuation of “Inside PBC.”

Abdo went back to the UK in 2020 to work for CBS Sports as the host of the Europa League and Champions League. Abdo continues to work for DAZN’s boxing coverage in the US.

Since Ramtin seems to be a very private person when it comes to his personal life, he is not available on any social media platforms.

He has managed to stay away from the public eye.

However, Ramtin’s wife Kate is available on Instagram as @kateabdo. She is already verified as a celebrity on it.

She has over 217 K followers on Instagram and follows over 666 different accounts, which include various athletes, actors, actresses, social media personalities, and so on as of 2022.

Likewise, Kate is also available on Twitter as @kate_abdo. She has over 198.5 K followers on it and she follows over 544 different accounts.

Furthermore, She also has a YouTube channel that goes by the name “The Good Fight with Kate Abdo”. On it, she has over 2.5 K subscribers. Click HERE to see her YouTube videos.

How rich is Ramtin Abdo?

As a businessman and real estate agent, Ramtin must be a multi-millionaire. As of 2022, Abdo might have accumulated a total net worth of $20 million.

According to some accounts, Ramtin has made more money than he put in real estate.

Aside from Ina Venture GmBH and SMAP, he must have some other business from which Abdo makes lots of money.

His major source of income is his business ventures and real estate.

On the other hand, Kate has an estimated net worth of $2 million as of 2022. As a sports journalist, the British broadcaster makes around $100,000 yearly.

The couple has kept their riches, including their homes, businesses, and cars, a secret. However, it is well known that the two lead luxurious lifestyles.

Some facts about Ramtin Abdo