Who is Kyd Miller Duchovny? All you need to know about David Duchovny’s Son 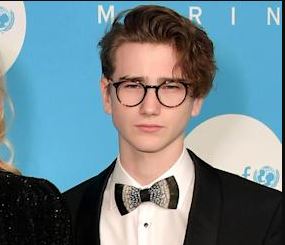 Kyd Kyd Miller Duchovny is an American celebrity child born to the two-time Golden Globe-winning actor David Duchovny and his actress ex-wife Tea Leoni. Kyd has been in the spotlight due to his parents’ fame. However, his personal and professional information has been on shades.

The youngest Duchovny child was born on the 15th of June 2002 and is 20 years old as of 2022. He was born in Los Angeles, California and holds an American nationality. Talking about his ethnicity, he is mixed of Polish, Ukrainian and Scottish roots (from his father’s side) and Italian, German, English, and Irish ancestors (from his mother’s side).

His father David and mother Tea tied the knot in 1997 but had ups and downs in their relationship since 2008. When and Why did they split?

Kyd has a Sibling

Kyd Miller Duchovny is the second child born to David Duchovny and Tea Leoni. He also has an elder sister named Madelaine West Duchovny. She was born on April 24, 1999, in Los Angeles. Madelaine is two years older than her brother Kyd.

His sister attended Ethical Culture Fieldston School and is now an aspiring actress. She even played a role in the 2018 crime series; The X-Files with her dad. The two siblings have been good friends of each other since childhood.

Kyd Miller’s current profession is not known. He lives a very private life and has not revealed what he is doing currently. He is studying at Pitzer College.

In 2003, he made his TV appearance with VH1: All Access. Since then, he has been away from the screen. However, his all family members are involved in the TV industry.

His father David is popular for his appearances in movies like The X-Files and Californication through which he won two Golden Globe Awards. He has portrayed in numerous movies and TV series. Besides, he is also an author and musician and has displayed his works through his books and music

Her Parents’ Relationship Timeline; Why did they Divorce?

Kyd Miller’s parents met in 1997 and married after dating for a short time on May 13, 1997. The couple welcomed their first child Madelaine West Duchovny on April 24, 1999, while their second child Kyd was born in 2002.

In 2008, the couple separated for several months after David went to rehab for sex addiction. However, they reunited later in 2009. Some sources even claimed that he had extra affair with Hungarian tennis instructor Edit Pakay and went to rehab to save his marriage. However, the actor denied the rumors.

Kyd’s mother was married prior too. He was in a marital relationship with her ex-husband Neil Joseph Tardio, Jr., a television commercial producer, from June 8, 1991, to 1995.

Kyd Miller Duchovny is still a college student and doesn’t have an income source of his own. However, he is born in a multi-millionaire family whose parents both are famous actors.

His father has a net worth of about $60 million. He makes huge money from his TV appearance and reportedly received a paycheck of $225,000 per episode for starring in the TV sitcom Californication. He was also a part of the movie The X-Files which made a box office collection of $189.2 Million over a budget of $66 Million.

His mother has a net worth of about $50 million including a lavish apartment on the Upper West Side at 190 Riverside Drive. She bought it for $5.1 million.

The celebrity child has been living a luxurious life from his parents’ income.

The popular celebrity child is probably single but could also be dating his secretly in his college. He has an Instagram @the_kyd but has kept it private. He could have posted about his affair and girlfriend on Instagram but at the moment, we guess he is enjoying his singlehood.

One thought on “Who is Kyd Miller Duchovny? All you need to know about David Duchovny’s Son”