Who is Kamen Dobrev? Untold Truth about Nina Dobrev’s Dad 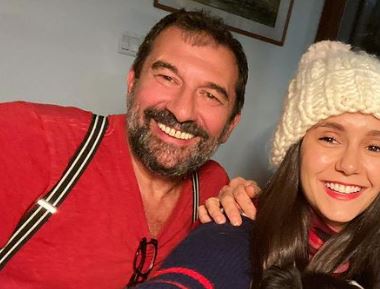 A computer specialist by profession, Kamen Dobrev is the father of Canadian actress Nina Dobrev. Kamen currently works as an RDC Lead at DXC Technology based in Sofia, Bulgaria.

His daughter Nina is popular for portraying Elena Gilbert and Katherine Pierce on The CW’s supernatural drama series The Vampire Diaries.

Kamen was born in Sofia, Bulgaria, and holds both Canadian and Bulgarian nationality. There is no information about his childhood and family.

He attended Universitet po Arhitektura where he received his Master’s degree in 1986.

After several minor jobs, Kamen started working as a Senior System Administrator at IBM Global Services in 2003. He worked there for 3 years and joined HP as Workplace and Mobility Manager.

Dobrev was promoted to the delivery lead position in 2006. He is now the IO Capability Manager since 2009. Besides, he also works at DXC Technology as RDC Lead.

Details about his Wife and Children

Dobrev is married to his wife Michaela Dobreva (née Radeva), who is an artist by profession.

The couple is together since the 1980s and has two children a son and a daughter named Nina Dobrev.

Kamen moved to Canada in 1991 after the birth of his daughter and relocated to Scarborough, Toronto

Kamen is popular as the father of Canadian actress Nina Dobrev. She is known for her roles as Elena Gilbert and Katherine Pierce in the drama series Vampire Diaries.

Nina was born Nikolina Kamenova Dobreva on January 9, 1989, in Sofia, Bulgaria. She moved to Canada with her parents when she was 2.

Kamen’s daughter made her acting debut as Mia Jones in the Canadian teen TV drama series Degrassi: The Next Generation in 2006 and was a part of the series until 2009.

During that time she appeared in several other series like Playing House, Too Young to Marry, Never Cry Werewolf, and Eleventh Hour.

Nina then joined the cast of Vampire Diaries which gained huge popularity. She starred in a lead role until season 6 in 2015. Nina has also guest-starred in several TV series like Family Guy, The Originals, Workaholics, etc.

Moreover, Nina was nominated for several awards in different categories for her appearance in Vampire Diaries and even won many of them.

Who is Nina Dobrev Dating?

Kamen’s daughter Nina is reportedly in a relationship with American snowboarder Shaun White.

They were first rumored to have an affair in February 2020 and were also spotted spending time in Malibu.

“They’re enjoying their time together and getting to know each other better. Nina really likes Shaun, and they both laugh a lot together.”

Nina made her relationship public in May 2020, sharing a photo of the couple on her Instagram. They are still together and have a very good relationship.

Besides, Nina has dated several other boyfriends in the past. She dated Vampire Diaries costar, Ian Somerhalder, from 2011 to 2013.

The Canadian actress then had an affair with Bridge of Spies actor, Austin Stowell, from 2015 to 2016. She was also linked with former Scream Queens star Glen Powell in 2017.

Net worth and Earnings per Episode

Kame has along experience working as a computer specialist and has served in big companies like HP. Having worked for more than 15 years, he reportedly gets paid a huge amount in salary.

Moreover, he is also working in another company where he earns thousands of dollars.

Besides, his daughter has a net worth of $10 million. She reportedly charges thousands of dollars for appearing in the series and movies.

Her salary for portraying in the Vampire Diaries was $30,000 per episode approximately.

Celebrity Father: ASAP Rocky’s Late Father Adrian Mayers: What is the Cause of his Death?