Everything about Joanna Teplin (Age, Family, Husband, Children, Net worth) 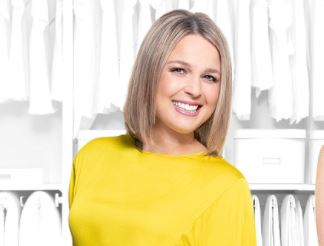 Joanna Teplin is an American entrepreneur, TV personality, and author who has co-founded The Home Edit, a home organization and design business along with Clea Shearer. The business partners also run an Emmy-nominated Netflix series, Get Organized With The Home Edit.

Also a co-author of several bestselling books with her partner, how is Joanna doing with her personal and professional life? Stay with us to know about her family, husband, kids, earnings, and more.

Joanna Tepli was born on August 20, 1979, in Chapel Hill, NC. She is 42 years old as of 2022. She was born to her father Dr. Stuart Teplin who is a pediatrician in North Carolina and her mother, Sari Teplin who works as a consultant to healthcare organizations.

Joanna attended the University of California in Santa Barbara where she graduated with a BS degree in Film/Cinema/Video Studies in 2001.

She loved painting since she was a child. She also worked in San Francisco’s famous Union Street Papery in her early days.

Teplin moved to Los Angeles in 2007 and started wedding planning with Joanna Teplin Invitation Consulting. She then shifted to San Francisco after two years due to which she had to discontinue the wedding planning.

Joanna again moved to Nashville in 2013. She met Clea Shearer through a mutual friend in 2015. They soon planned and started a new home organizing company The Home Edit.

Joanna is a cast on Netflix with the series, Get Organized With The Home Edit, since September 2020.

Who is Joanna Teplin’s Husband?

The TV personality is married to her husband Jeremy Rubin. He is a promotional manager at Warner Bros. Records. He studies Bachelor of Arts in business administration at the University of Florida and graduated in 1995.

He currently works as a VP in adult formats at Warner Bros. Records since 2014.

Joanna moved with her husband from place to place because of his job transfer. Likewise, her husband seems to be supportive as he is now supporting his wife with her work and hasn’t moved anywhere from Nashville.

The couple is also raising their two kids, a son named Miles Reid and a daughter named Marlowe Aerin. Their first child was born in 2011.

Joanna is earning her name and fame with her show Get Organized With The Home. Besides, her business is also growing rapidly and is getting a lot of offers these days. She must be earning thousands of dollars from her business.

Moreover, she has also co-authored two books titled The Home Edit: Feel Good Organizing Special Issue and The Home Edit Workbook: Prompts, Activities, and Gold Stars to Help You Contain the Chaos, THE Home Edit Life: The No-Guilt Guide to Owning What You Want and Organizing Everything with her business partner. The books were bestselling of heat time which might have earned her good fortune.

As of 2022, her net worth might be in the millions but the details is still a mystery.

See: Who is Emily Schromm from The Challenge? (Bio, Age, Sexuality, Childhood)