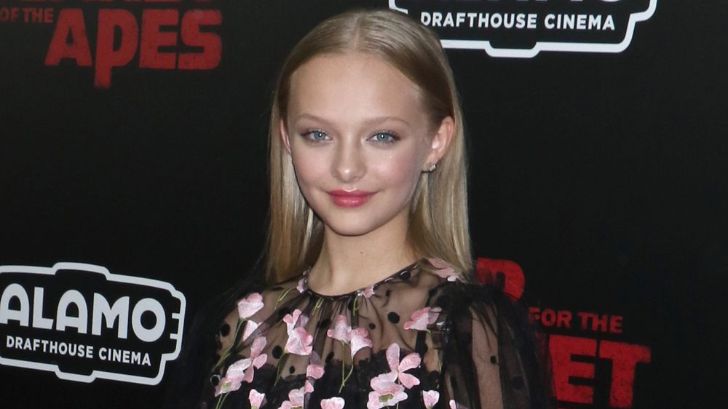 Amiah Miller is an American actress best known as Valerie Lawson on the television series MacGyver. Similarly, she is popular for her performance in War for the Planet of the Apes, The Water Man, and Anastasia.

Amiah Miller was born on July 16, 2004, in the United States of America. As of 2020, she is 16 years old and stands at a height of 5 feet 5½ inch tall. Her father is Merrill Miller while the identity of the mother is not available.

Amiah has tightly sealed her lips when it comes to her personal life. The details about her parents, ethnicity, siblings, and educational background is not available.

What Is The Net Worth Of Actress Amiah Miller?

Miller began her acting career in 2014 with the television film Clementine. The next year, in 2015, she appeared in some episodes of TV shows like Henry Danger, Richie Rich, and Best Friends Whenever. The same year, she played Riley in the TV movie How We Live.

Additionally, in 2016, Amiah featured in the film Lights Out. Eventually, she grabbed the limelight for playing the role of Valerie Lawson on the action-adventure TV series MacGyver starring Lucas Till, George Eads, Sandrine Holt, Tristin Mays, Justin Hires, and Levy Tran.

Furthermore, 16 years old Miller’s other notable acting credits include movies and TV shows such as Heroes, War for the Planet of the Apes, Trafficked, House by the Lake, Anastasia, The Water Man, and Burn Alive. She has self-appeared in series like Made in Hollywood, Home & Family, and Last Week.

5 feet 5½-inch tall actress is single at the moment. Currently, she is not dating a boyfriend. She is growing up under the love and care of her parents and family.

Amiah is focused on her acting career rather than any kind of relationship. As of 2020, she has 156k followers on Instagram and 4,014 followers on Twitter.

According to Influencer Marketing Hub, Miller earns around $471 to $785 per sponsor post with an engagement rate of 4.02%.