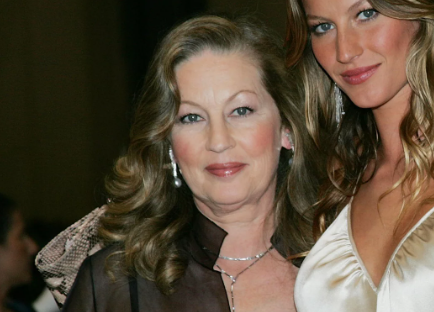 Vania Nonnenmacher is a Brazilian citizen who is popular as the mother of supermodel Gisele Bundchen. Besides, she worked as a bank clerk.

Vania’s daughter Gisele is a former Victoria’s Secret Angel who is one of the highest-paid models. She is also popular as the wife of NFL star Tom Brady and has dated popular American actor Leonardo DiCaprio.

Where is Vania Nonnenmacher? What’s she doing currently? Know everything about her family, children, and personal life.

Vania Nonnenmacher was born in Brazil in 1950. She holds a Brazilian nationality but is of German descent. She is a fifth-generation German Brazilian. Vania celebrates her birthday on the 23rd of July.

She grew up in a Roman Catholic family.

Vania worked as a bank clerk at Banco do Brasil and is now a pensioner.

Who is Vania Nonnenmacher’s Husband?

Nonnenmacher is married to husband Valdir Bündchen who is a sociologist and writer. The couple probably tied the knot in the 1970s.

They are the parents of six children who are all daughters named Raquel, Graziela, Gabriela, Rafaela and her fraternal twin, Patrícia and Gisele Bundchen.

Ania’s father-in-law Walter Bündchen once served as mayor of Horizontina.

Vania gained popularity as the daughter of Gisele Bundchen. She is a Brazilian supermodel who became popular after featuring in Vogue.

She was born Gisele Caroline Bündchen, on 20 July 1980, in Horizontina, Rio Grande do Sul, Brazil. Gisele speaks Portuguese, English, Italian, Spanish and some French languages and also understands German. Gisele featured in Victoria’s Secret from 1999 to 2006 and was also on the cover of many magazines.

Her daughter is also one of the highest-paid models and was also named on the list of Powerful Women in the World by Forbes.

Vania inspired Gisele to be a Model

Her daughter initially wanted to be a volleyball player. However, she was interested in modeling after her mother, Vania, admitted her sisters Patrícia and Gabriela to a modeling course.

Gisele then came in contact with Elite Model Management and also took part in Elite Model Look, where she came second. She debuted as a model at New York Fashion Week in 1996.]

Her daughter Gisele has dated several popular figures. She first was in a relationship with actor Leonardo DiCaprio for five years, from 2000 to 2005. She later separated from him, which she mentioned in her Memoir.

I was becoming more and more aware of things that I’d chosen not to look at. Was I alone in wanting to do some serious soul-searching while he stayed the same? In the end, unfortunately, the answer was yes.

Soon after splitting from DiCaprio, she started dating NFL player Tom Brady. They were introduced by their mutual friend and first met on a blind date. they tied the knot on 26 February 2009 and again remarried in April 2009 in Costa Rica.

Vania is the mother of six daughters, but the marital status of her other daughters, except Gisele, is still unknown.

She has two grandchildren from Gisele’s marriage with Tom Brady. Her first grandson Benjamin Rein was born in 2009, while her second granddaughter Vivian Lake was born in 2012. Her daughter is also raising a stepdaughter from Tom’s past affair.

Vania probably has other grandchildren from her remaining 5 daughters.

Vania is a retired bank clerk who now gets a pension to support her living. She raised her six children with her income from the bank, supported by her husband, who worked as a sociologist and writer. Her current net worth is unknown.