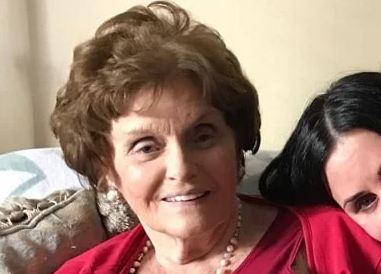 Courteney Copeland is the mother of American actress, director, and producer Courteney Cox.

Courteney was born as Courteney Bass Copeland in September 1934. She grew up in Birmingham, Alabama, United States. She is currently 87 years old as of 2022.

Courteney Copeland’s husband is Richard Lewis Cox. The couple tied the knot in 1960 but divorced after 14 years in 1974.

They have four children ta son and three daughters. Their first child, a son Richard Jr was named after her husband. She then gave birth to a daughter Courteney Cox on June 15, 1964, who she named after herself.

Courteney’s husband is a businessman based in Alabama.

After being married for 14 years and becoming the parents of 4 children, the couple decided to end their relationship but did not reveal the reason behind their split.

Their divorce was finalized in 1974 and her husband shifted to Florida.

After moving to Florida, her former husband started a new business and founded Cox Pools. He was diagnosed with Merkel Cell Carcinoma, a rare, aggressive skin cancer. He died on September 3, 2001.

Who is her Second Husband?

Courteney then married Hunter Copeland and changed her last name from Cox to Copeland. He previously worked as an Alcohol and Drug Abuse Council Director.

Her second husband was previously married and has 5 children. Hunter is an uncle to music promoter and business manager Ian Copeland and The Police drummer Stewart Copeland.

Copeland’s daughter Courteney Cox is an American actress born on June 15, 1964, in Birmingham, Alabama, U.S. She attended Mount Vernon College in Washington, D.C but dropped out of college to pursue an acting career.

She dated Michael Keaton and was engaged in 1989 but split from him in 1995. Courteney then married David Arquette in 1999 and welcomed a daughter. The couple separated in 2013 and later engaged with Johnny McDaid in 2014. They have broken off the engagement but are still together.

Courteney’s granddaughter Coco Riley Arquette is a rising actress born on June 13, 2004. She was born to Courteney Cox and her former husband David Arquette.