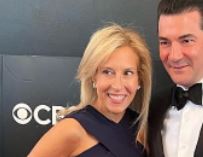 Allyson Nemeroff is the celebrity wife of Scott Gottlieb American physician and investor. Nemeroff works as the national advertising director for The New York Sun.

Her husband currently stands as a senior fellow at the conservative think tank, the American Enterprise Institute (AEI). Besides, he served as the 23rd Commissioner of the Food and Drug Administration (FDA) from May 2017 until April 2019.

She was born Allyson Nemeroff Gottlieb in 1975 and is 47 years old as of 2022. She was born to her mother, Helaine Nemeroff and her father, Dr. Ronald M. Nemeroff.

Her mother, who is from Floral Park, Queens, was a teacher at Public School 48 in Jamaica, Queens. Her father is a dentist and owned R.M.N. Consultants, a company in Manhattan that helps sell dental practices.

Allyson’s parents divorced when she was a child, and her father married Ellen Nemeroff, who is her stepmother.

She is a graduate of the University of Pennsylvania.

Allyson Nemeroff has been serving as the national advertising director based in Washington and Manhattan for The New York Sun.

Nemeroff and her husband, Scott Gottlieb, have been married for around two decades now. The duo tied the wedding knot on June 13, 2004, at the 3 West Club, at the Women’s National Republican Club in Manhattan. N.J. Rabbi Chaim Rogoff officiated their wedding ceremony.

The couple has been married for 17 years and will celebrate their 18th wedding ceremony on June 14. They are the parents of three children, all daughters, and reside in Westport. All three daughters are in their teens.

Nemeroff and Scott have a very good marital relationship. They have maintained privacy about their children.

See: Juliette Corrin Wikipedia: Where is Emma Corrin’s Mother From?

Who is her Husband, Scott Gottlieb?

Allyson’s husband, Scott, is a physician and investor who currently serves as a senior fellow at the conservative think tank, the American Enterprise Institute (AEI). Moreover, he is also a board of directors member of drugmaker Pfizer, Inc.

Gottlieb gained popularity for his tenure as the 23rd Commissioner of the Food and Drug Administration (FDA) from May 2017 until April 2019.

Apart from this, he is also a television personality who frequently appears as a guest on the CBS News program Face the Nation.

He is a graduate with a bachelor’s degree in economics from Wesleyan University and earned his medical degree from the Mount Sinai School of Medicine in New York.

Gottlieb comes from a Jewish family.

Scott is a Cancer Survivor

People might knot know that the 23rd commissioner of the Food and Drug Administration (FDA), Gottlieb is a survivor of deadly cancer.

He was diagnosed with cancer named Hodgkin’s Lymphoma. Being from a family full of doctors helped him a lot as to his father, father-in-law, and Scott himself are doctors.

Scott is clean from cancer now and has now dedicated himself to finding drugs for the cure and also its management. He has also launched as Cancer Policy Advisor of the National Coalition for Cancer Survivorship.

Her husband is a physician and an investor who has an estimated net worth of $1 Million. As a commissioner of the Food and Drug Administration, he reportedly earned $200 thousand annually.

Nemeroff is active on Instagram as @allysongottlieb but has kept it private. She is not much active as she has only made two posts. Moreover, her husband’s Instagram account is @scottgottliebmd and is followed by more than 6k fans.