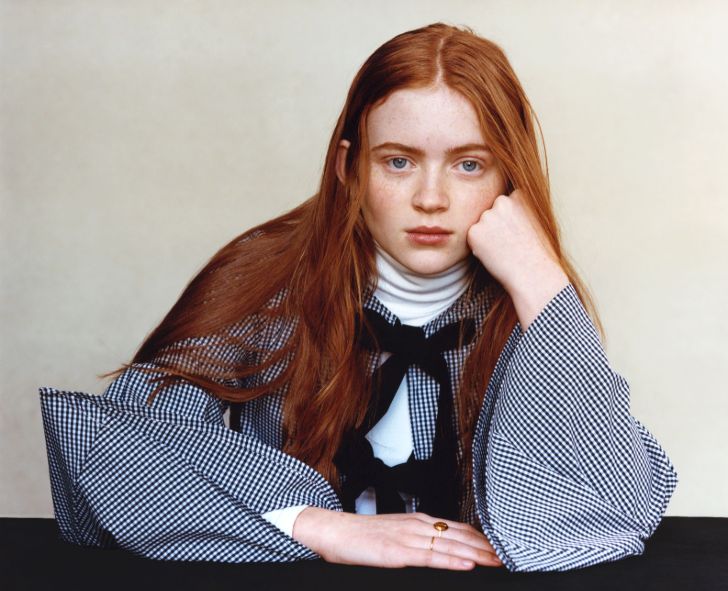 Sadie Sink is an American actress. She is famous as Maxine “Max” Mayfield in Netflix’s Stranger Things (2017-present). Similarly, she is also known for her work in Blue Bloods, The Americans, The Glass Castle, and Eli.

Sadie Sink was born on April 16, 2002, in Brenham, Texas, to parents Casey and Lori. She is an American citizen whereas her ethnicity is white.

Altogether, she has 4 siblings. She spent her childhood with her 3 brothers, Mitchell, Spencer, Caleb, and a sister, Jacey.

How Did Sadie Sink Start Acting?

During her childhood, Sink was so obsessed with recreating Disney’s High School Musical with her brother, Mitchell. Due to this reason, her mom decided to send her for acting class in a community theatre.

After that, she went for a Broadway audition and eventually, earned a role in the 2012 revival of Annie when she was 11 years old. Also, she appeared in the Emmy winning series The Americans.

Furthermore, her other notable acting credits include films and television shows such as Chuck, The Glass Castle, Dominion, Eli, Blue Bloods, American Odyssey, and Unbreakable Kimmy Schmidt. She is all set to appear in her post-production movies, Fear Street, Fear Street 2, and Dear Zoe.

To date, the rising actress has 12 acting credits under her name. Sadie Sink has an estimated net worth of $1 million as per the Celebrity Net Worth.

Stranger Things‘ star is very private when it comes to her personal life. Lack of confirmed news, details about her dating life remain mysterious. So far, the information about her relationship status, boyfriend, or partner is not available.

In order to know about Sink’s professional and private life, you can follow her on any social media platforms where she is active.

What is Sadie Sink age?

How tall is Sadie Sink?

What is Sadie Sink net worth?

She has an estimated worth of $1 million.