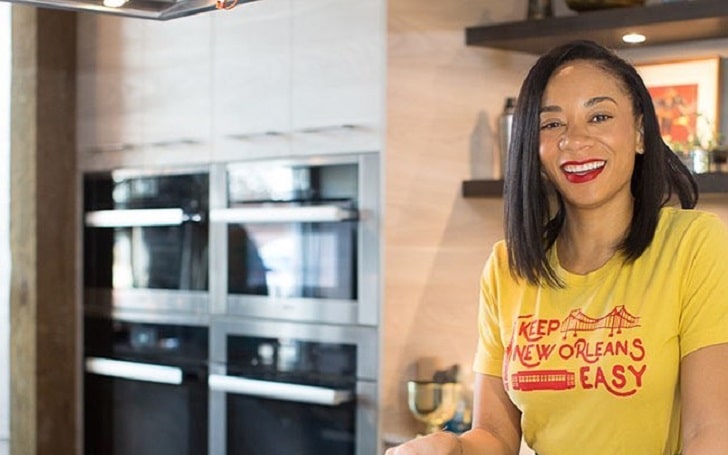 Ryan Nicole Hughley is an American food blogger, writer, and food journalist widely recognized as the daughter of D.L. Hughley. Apart from her father’s fame, Ryan is an established personality who does good in her field.

Who Is Ryan Nicole Hughley? Her Age

Ryan was born in Southern California, U.S., in 1987 to her loving parents D. L. Hughley and LaDonna Hughley. Hughley holds an American nationality, and she currently resides in Atlanta, Georgia.

As of 2021, her age is 34 years. She spent her childhood with her siblings, Kyle Aaris Hughley and Tyler Whitney Hughley.

The star kid is a businesswoman who is running her own business company named Brown Sugar and Bourbon.

Everything On Her Parents

Hughley comes from a superior family, and a well-known couple raised her. Her father, D.L. Hughley, was born in Los Angeles, California, the United States, on March 6, 1963, making his age 58 years now.

Ryan’s dad is one of the most admired personalities in this field who has starred in more than thirty movies or series. For over a decade, D.L. has been in the entertainment industry and has gained various experiences working on numerous projects. Talking about the legendary personality, he got married to LaDonna Hughley in 1986, with whom he shares three children, two daughters and a son.

Their son, Kyle, has Asperger syndrome, and the couple has talked about it on several instants.

Who Is Ryan Married To? Her Husband & Children

Ryan Nicole Hughley is happily married to her boyfriend turned husband, Alejandro Gilberto Calderon Shepard. The loving duo met each other during their graduation parties and tied the marital knot on September 13, 2018.

The wedding ceremony was held at the Hudson Loft in Downtown Los Angeles, California. The duo is also raising a beautiful child, but the name is still under wraps.

We can go through her Instagram handle to see numerous pictures.

Net Worth Of Ryan

Hughley might have a net worth somewhere around $500,000. She has been doing her business for many years from where she makes her living. Apart from that, she has a decent presence on Instagram, and her estimated earnings from a post are approx. $79.5 – $132.5.

Besides, she is passionate about food and culture. So, she shares food and libations recipes through her website, Brown Sugar & Bourbon. Likewise, her father is one of the wealthiest personalities in the industry, whose assets are worth over $10 million.

Ryan Nicole Hughley is a hard-working personality who is engaged in her business, venturing her food passion. She went to the University of Southern California and graduated with a master’s degree.

After the completion of her education, Hughley began working professionally. Not only that, but she is also a freelance writer.