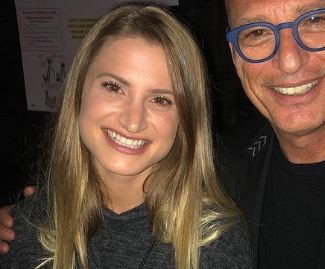 Riley Mandel, the youngest daughter of Howie Mandel, has been out of the spotlight despite being born to a famous comedian and TV personality.

She is a Doctorate graduate with an academic excellence award. She currently works as a physical therapist and fitness instructor.

Riley Mandel Family and Ancestry: How old is she?

Riley was born in 1992 and is currently around thirty years old. She was born in Los Angeles, California, United States, to Canadian parents Howie Mandel and Terry Mandel, so, she holds both Canadian and American nationality.

Her paternal ancestors are immigrants from Romania and Poland. Her grandfather was a lighting manufacturer and a real estate agent.

She has two siblings, a sister named Jackie Mandel and a brother named Alex Mandel.

Yes, the youngest Child of the Mandel family is married to her husband Cameron Ehrlich. She tied the knot with her college sweetheart and longtime boyfriend in July 2019.

They had a private wedding ceremony in presence of their close ones.

Her father posted a photo of Riley’s wedding and wrote, “This happened. My baby girl #wedding #family“

Her mother also shared a photo of their wedding and captioned it, “My beautiful daughter and her handsome husband! Love is in the air.”

Cam proposed to her in Ghirardelli Square in the Fisherman’s Wharf space of San Francisco.

Howie and Terry knew each other since they were 12 years old and started dating in high school.

After dating for several years, they married on 16 March 1980. They became parents of three children, two daughters and a son.

The couple still has a very good marital life after four decades. Howie often mentions Terry as the reason behind his success. He revealed that he initially rejected the show Deal or No Deal but his wife supported him and asked him to sign the show.

About her Father Howie

The comedian attended William Lyon Mackenzie Collegiate Institute but was expelled. He then took a job as a carpet salesman.

He also performed as a standup comedian and moved to Los Angeles where he was hired as a regular performer.

Mandel initially starred in several movies like Walk Like a Man, Magic Kid 2, Hansel and Gretel, and Little Monsters.

He gained fame as the host of Deal or No Deal and also worked as a judge on America’s Got Talent.

Besides, he has appeared in the TV shows Good Grief, Bobby’s World, The Nanny, 7 Days in Hell, etc.

The Canadian comedian has an obsessive-compulsive disorder in the form of mysophobia, a pathological fear of contamination and germs.

Due to this, Mandel doesn’t shake hands with anyone. He even didn’t shake hands on his show Deal or No Deal instead he does a fist bump and pat on their shoulders.

Howie has been taking medicine to control this. Besides, he also shaves his head due to the disorder.

Mandel doesn’t use public bathrooms and washes his hands several times if he accidentally shook hands with someone.

He opened up about his condition and revealed that he has been facing it since childhood.

I don’t remember a time when I didn’t feel there was an issue, but I wasn’t diagnosed until adulthood. I’ve always felt a little bit different, and I always knew I wasn’t as comfortable with life as everybody else seemed to be, but I didn’t know what I could do about it. When I was a kid, I didn’t know anybody who went to a psychiatrist. There was always a stigma attached to mental health issues. I think there still is. But now I’m taking care of myself.

Where are her Siblings?

Her sister Jackie, who worked as a primary teacher in Los Angeles schools, is now married to Lex Larson since 2013. She has two children, a son named Axel and a daughter named Abbey.

Her brother Alex is a jokester and YouTube vlogger. He has a channel “Alex Mandel Drinks”, where he posts videos making different mixed drinks. One of his videos has been watched by more than 7 million people.

Besides, he also sells t-shirts.