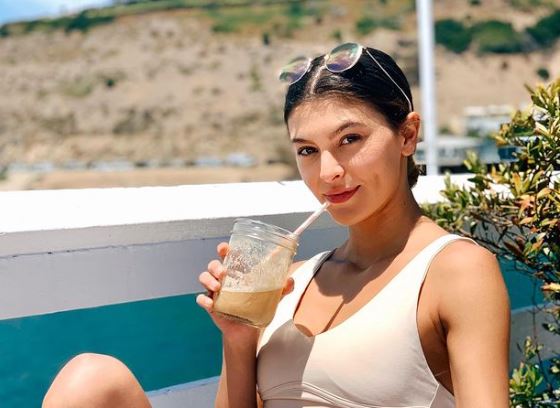 Kelsi Taylor, a fitness instructor and musician by profession, recently came into the limelight after she and her comedian boyfriend Dane Cook announced that they are engaged despite the 27 years of age gap.

They started dating when Kelsi was just 17 and have taken their relationship to the next level as soon as she turned 23. However, their followers are not quite okay with their decision.

Kelsi Taylor Wiki and Age: Who are her Parents?

She is American by nationality but her ancestry is still not disclosed.

Taylor’s mother is Deb but hasn’t revealed about her father. She has two siblings, a brother named Nathan and a sister named Britney.

Kelsi introduces herself as a certified Pilates/TRX Instructor and certified Food Therapist/Nutritionist on her Instagram bio. Moreover, she is also a musician and actress.

At the age of 15, she debuted in the TV series ‘The Funny Bunch’. Soon after that, she portrayed in the movie ‘Can’.

Besides, she has also starred in ‘My Name is Asia’, ‘Alchemy’, Josephine’, and ‘Totally’.

Taylor made her comeback to TV starring in the comedy series ‘Up in Arms’. After that, she landed roles in ‘Beach Seasons’ and ‘The Overlooked’.

Kelsi then turned her career into music and started a self-titled YouTube channel. She did the covers of songs like ‘Almost Lover’ and ‘Youth’ and uploaded them on her channel.

Moreover, she also featured as a backup singer for the popstar Demi Lovato at the Jingle Ball in Sunrise, Florida. Likewise, she even performed the track ‘Sorry Not Sorry’ at the American Music Awards in November 2017.

After releasing the covers of Daughter’s ‘Youth’ and Norah Jones’s ‘Don’t Know Why’, she recently announced that she was releasing her original music.

Taylor’s debut EP ‘Fear of Yourself’ under her own label was released in August 2018. It also contains a song produced and directed by her boyfriend Dane Cook.

Kelsi Taylor and her boyfriend Dane Cook recently announced that they have engaged after 5 years of relationship.

According to reports. The comedian proposed to his girlfriend, who is 27 years younger than him in York Beach, Maine, on July 13. Kelsi also shared a video of her fiance proposing to her for marriage with a diamond ring.

Fiancé has a nice ring to it 💍

The secret’s out! @danecook and I are engaged ✨ A couple weeks ago, Dane got on one knee and asked me to be his wife and I couldn’t have asked for a more perfect moment. I love this man and love spending my life with him. I can’t wait for what’s to come.

Cook also shared the happy news on Instagram and revealed that his fiance has replied ‘yes’.

How did Kelsi Taylor and Dane Cook Meet?

Taylor and Cook first met at a game night hosted by Cook- which he revealed in an Instagram Live Q&A in August 2019.

“We met at a game night I host at my place. We were friends for a while & soon after fell in like with each [other] and then upgraded to love.”

Kelsi recently replied to Dane’s 5-year-old tweet made in May 2017 where he had asked a question, “If you could go back and tell your 15 year old self something what would it be?”. Referencing it with their engagement, an anonymous user joked by writing, “Hmm, probably avoid marrying the 50 year old predator at age 23”.

The 23-year-old singer, musician, and fitness instructor has a perfect body figure. She is 5 feet 3 inches tall in height and weighs 55 kg approximately.

Kesi is active on Instagram where she is with the handle @itskelsitaylor. She has more than 40k followers.

Net worth and Earnings: How much is her Fiance worth?

Kelsi is a musician, actress, and instructor. She has appeared in several movies and TV series but has left the industry for some time.

She reportedly had a good paycheck as an actress and earned well for a living. After that, she released several cover songs and also performed on stage.

As a musician, she had quite a good income. However, she is a certified fitness instructor now. She reportedly earned more than $50 thousand. Her net worth is estimated to be in 6-digit figures.

In addition, she also makes money from sponsorships and has a deal with Aquasana.

Her fiance is a popular comedian with a net worth of $35 Million. Moreover, he owns real estate properties, cars, business lines and many more.