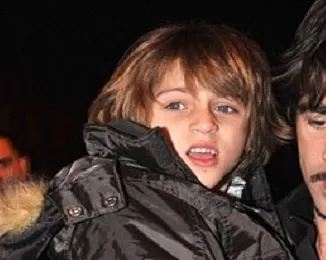 His father Colin is one of the greatest film actors of Ireland. He has starred in many movies like Tigerland, American Outlaws, Phone Booth, The Recruit, Daredevil, etc.

His parents dated for sometime in the early 2000s and became the parent of James Padraig Farrell in 2003. They later split and have been raising their child under joint custody.

James was born with Angelman syndrome due to which his parents Farrell and Bordenave filed conservatorship of the 18-year-old celebrity child.

How his James’ lifestyle? How old is he? Read the article to know more about James.

James Padraig Farrell is the son of Colin Farrell and Kim Bordenave. He was born On September 12, 2003 in Los Angeles and has turned 19 years old.

Farrell holds an American natioanlity and comes from Irish and Polish descent.

His maternal grandparents are Rita (née Monaghan) and Eamon Farrell. His grandfather played football for Shamrock Rovers FC and was also involved in a business.

His father Colin Farrell is an actor while his mother Kim is a Canadian born American model.

James doesnt have any bilogical siblings but has a half-brother named Henry Tadeusz. Henry is the son of Colin Farrell and his former Polish actress Alicja Bachleda-Curuś.

His parents Colin Farrell and Kim Bordenave were not married. They began dating in 2002 and welcomed their child James Padraig in 2003.

However, they split shortly after the birth of their son. There is no further detail about their relationship and brakup.

After the divorce, James’ mother tied the knot with Jimmy Gamboa and is living happily with her husband. Their wedding ceremony was held in Malibu, California.

Meanwhile, his father Colin has had several relationships.

Likewise, he was in a relationship with Polish actress Alicja Bachleda-Curuś 2009 to mid 2010s. The couple shares a son named Henry Tadeusz born in October 2009.

James has Angelman syndrome which is a genetic condition that affects the nervous system and causes severe physical and learning disabilities.

His illness has caused him developmental problems, sleep disorders and epileptic seizures.

In 2021, Colin and Kim filed a joint petition for a conservatorship of their son before he turned 18. They have asked the court to grant permission to manage their son’s sensitive information, to be allowed to give or refuse medical permission, and to decide on their son’s behalf regarding his relationships.

They have also mentioned about the condition of their son on the documents which read “nonverbal, has issues with his fine motor skills and cannot provide for his own health and well-being.”

Because of his illness, James Padraig Farrell doesnt appear much on the public and lives a private life.

He could be around 5 feet tall but his body weight hasn’t been disclosd yet.

James has Angelman syndrome so, he is unable to do any kinds of physical works. He is currently under his parents’ guidance despite being more than 18 years old.

His life is fully funded by his parents and they have been taking good care of him.

His father Colin is one of the greatest Irish actor who has an estimated net worth of $80 Million. He earns more than a million for plying lead role in the movies.

His mother Kim Bordenave is also a model but her net worth is sill no known.

Read Next: Who is Eliyanah Monroe? Know about Diana Jenkins’ Daughter