Who is Eliyanah Monroe? Know about Diana Jenkins’ Daughter 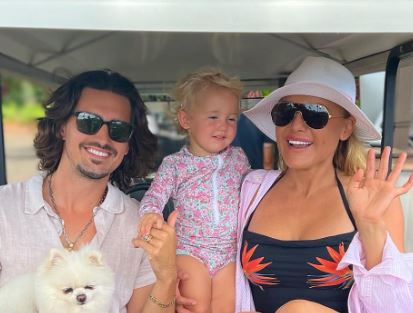 Eliyanah Monroe is the daughter of American-based entrepreneur and philanthropist Sanela Diana Jenkins and her toy boy fiance Asher Monroe. Her father is a musician and, actor.

Her mother Diana was born and raised in Bosnia and Herzegovina. She left the country during the siege of Sarajevo.

Eliyanah’s parents are not married but have reportedly engaged recently. Earlier, her mother was married to Roger Jenkins. She has two half-siblings from her mother’s former marriage.

Eliyanah Monroe Wikipedia and Age: Who are her Parents?

Likewise, her paternal grandparents are Holly Book and Arnold Book.

Born in California, the USA, Eliyanah Monroe holds American nationality. She comes from a mixed ancestry of American and Bosnia and Herzegovina.

Eliyanah is a celebrity child born to popular parents. Her mother Sanela Diana Jenkins is a Bosnia and Herzegovina-born American entrepreneur and philanthropist.

She was born in 1973 and is around 49 years old. Daughter of Rašida Ćatić and Smajo Ćatić, she also has a younger sibling.

She attended the University of Sarajevo where she studied economics but had to quit college due to the war. She lived a refugee life in Croatia and then moved to London.

Diana studied Computer Science and Economics at the City University, London. She owns several businesses. Moreover, she was also cast in season 12 of The Real Housewives of Beverly Hills.

Who is Eliyanah Monroe’s father?

Her father Asher Monroe is an  American singer-songwriter, dancer, and actor. He was born on September 18, 1988 (age 33) in Arlington, Virginia, U.S.

As a singer, he has released several albums and singles. Moreover, he has also starred in TV programs like Parenthood, The Mentalist, Close to Home, etc.

No, Eliyanah Monroe’s parents are not married but have recently hinted at their engagement. They first met in March 2010 at Victoria’s Secret event while she was still married to her former husband Roger Jenkins.

They started dating in 2012 after her divorce from Jenkins. The couple recently completed a decade of their relationship but haven’t married yet.

However, Diana recently hinted that she has already engaged with her longtime partner. Before their engagement, they welcomed their only daughter Eliyanah.

Despite the 15 years of age difference, Diana and her fiance Asher have a very good relationship.

Her mother Diana Jenkins was previously married to Roger Jenkins from 1999 to 2012. The former couple shares two children.

Roger is a banker and works as an executive at Barclays Bank.

Does she have siblings?

Eliyanah is the only child of her parents and doesn’t have any biological siblings. However, she has two elder half-siblings from her mother’s previous marriage.

Innis is an entrepreneur. Innis and Eneya are popular on Instagram with thousands of followers.

The 2-year-old celebrity child has a very lavish life which she gets with her parents’ earnings and properties.

Her mother is an entrepreneur who acquired the swimwear line Melissa Odabash. Moreover, she has launched the Neuro line of functional beverages and is also the CEO and President.

Likewise, she also owns a music label D Empire Entertainment. She makes a huge income from her multiple businesses and has a net worth of $300 Million as of 2022.

Her father has earned a net worth of $1.5 Million as an actor and singer.

The RHOBH star recently announced that she would donate $100 Thousand to the families of the people that lost their lives during the crash of Lion Air 610 in 2018.

“I feel so much sympathy for the widows and orphans left behind. I know firsthand the pain and suffering that accompanies the loss of a family member, having lost my brother in the closing days of the Bosnian War. I want to do what I can to support those people who suffered so much.”

However, the law firm that is working on behalf of victims’ families has called her action, ‘an inappropriate’ and believes it is for the PR.

“While Ms. Jenkins may be well-intentioned, we do not believe that issuing a press release and soliciting donations from the public without having done the necessary legwork is an appropriate way to proceed. That being said, we hope that this is not a publicity stunt and will reserve judgment until we hear directly from her.”

Read Next: Xuri Li Sibounheuang- PnB Rock’s Daughter: Who is her Mother?