Canadian Chef Matty Matheson Biography: He Is Married And Blessed With Three Children 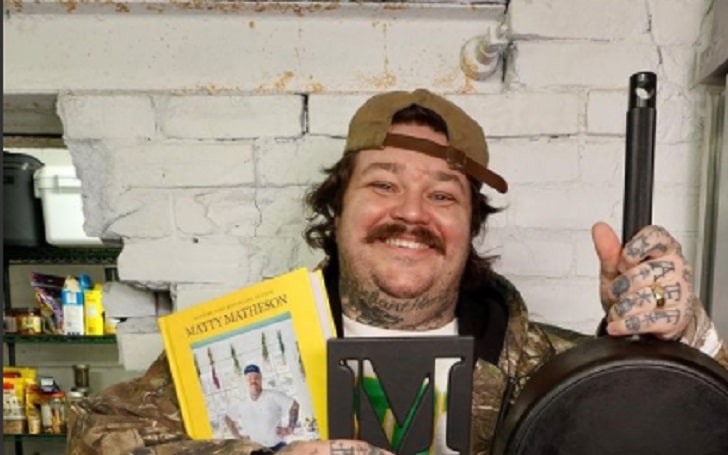 Matty Matheson is a professional Canadian chef, internet personality, and host just like Bryan Baeumler. The chef got into the limelight for his Viceland television series Dead Set on Life. He has a huge fan following on Instagram, over 1 million. The 39 years old chef is happily hitched with his long-term girlfriend turned wife, Trish Spencer, with whom she shares three children.

Short Details On His Early Life

Holding a Canadian nationality, Matty Matheson was born in Saint John, New Brunswick, on February 7, 1982. His full name is Matthew James Matheson. His parents Stephen and Joan Matheson raised him. His dad is an engineer, while his mother is a waitress. He and his family lived in Nova Scotia until Matheson turned 11 years old. After that, they moved to Fort Erie, Ontario. Furthermore, Matheson grew up as a member of The Church of Jesus Christ of Latter-Day Saints.

Matheson’s grandfather was a restaurateur and former RCMP officer from Prince Edward Island who also owned and operated The Blue Goose restaurant in DeSable. In 2000, the internet personality moved to Toronto and attended Humber’s cooking program. There he found his talent for butchering meat and continued his culinary career.

Matheson married his childhood sweetheart, Trish Spencer, a lifestyle expert. The couple exchanged wedding vows in 2014. Their relatives and close ones attended the marriage ceremony. Besides, the romantic pair has been together for over two decades after meeting in school. They also shared some pictures celebrating their marriage anniversary last year.

The happy couple has three children together, son MacArthur and daughters Rizzo and Ozzy, born in 2016, 2018 & 2020, respectively. Matheson resides in Fort Erie, Ontario, with his spouse and kids.

The Canadian chef is best recognized for his love of food on TV and online who started his culinary career under the advice of chef Rang Nguyen while working at Le Sélect Bistro. In terms of his net worth, he is estimated to have around $2 million. However, some sites have mentioned it to be over $4 million. The average wage received by a Chef is $20.08 per hour in Canada. So, Matheson might have earned in the same range as a talented chef.

Apart from being a chef, Matheson makes money from his YouTube channel, gaining over 930k subscribers. According to Social Blade, his estimated earning is $486 to $7.8K monthly, and his yearly income is $5.8K to $93.4K. Similarly, he has a strong presence on Instagram, from where he makes around $2,202 – $3,670 per post. Dead Set on Life alum has also appeared in various television reality series from where he might have received some fortune.

After completing his education, Matty started his career by working at Le Sélect Bistro under chef Rang Nguyen. Nguyen taught him French culinary techniques. After that, he was hired at the restaurant La Palette in 2008. And he gained the position of executive chef at the new Parts & Labour restaurant in 2010. Apart from being a talented chef, he has appeared in numerous shows and series and starred alongside renowned figures.

Matheson was a host of Keep It Canada with Matty Matheson, Dead Set on Life, Home Style Cookery, and many other shows. Some of his guest appearances include Hot Ones, The Social, Craig of the Creek, and Jimmy Kimmel Live!. Additionally, Matheson is also a host of Just a Dash. In April 2021, he signed with Endeavor.