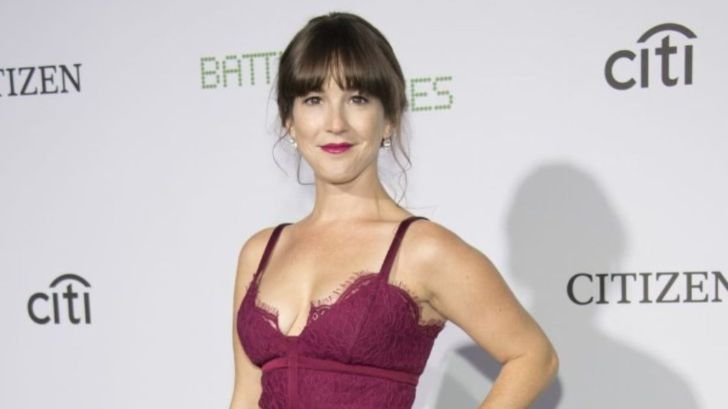 Martha MacIsaac is a Canadian actress, writer, and producer. She is famous for playing the role of Becca in the coming-of-age teen comedy film Superbad. Also, she is known for her appearance in The Last House on the Left, Dead Before Dawn, and Battle of the Sexes.

How Old Is Martha MacIsaac? What Is Her Height?

Martha MacIsaac was born October 11, 1984, in Charlottetown, Prince Edward Island, Canada. Her parents are Irene MacIsaac and Bruce MacIsaac. Currently, her age is 36 and has a height of 5 feet 4-inch (163 cm) tall.

She is youngest child of her parents. She has two sisters, however, the identity of her siblings are not available.

Have A Look: The Umbrella Academy Alum Cameron Brodeur’s Biography

What Is Martha MacIsaac Net Worth In 2021?

Martha began her acting career as Emily Byrd Starr in the television series Emily of New Moon (1998–2000). After that, she gave her voice in an animated series Eckhart in 2000.

Later, the 36-year-old made her big-screen debut with the film This Time Around. Following that, she became a part of Suburban Madness, Ice Princess, Slam Dunk, This Is Wonderland, Di-Gata Defenders, and Magi-Nation.

Finally, Maclsaac grabbed the limelight in 2007 after portraying the role of Becca in the coming-of-age teen comedy film Superbad. The movie starring Jonah Hill, Michael Cera, Seth Rogen, Bill Hader, and Christopher Mintz-Plasse earned $170.8 million at the box office under the budget of $20 million.

Moreover, her other notable acting credits are The Last House on the Left, Dead Before Dawn, Battle of the Sexes, Unicorn Store, What Keeps You Alive, Friends and Heroes, Greek, Family Guy, 1600 Penn, The Thaw, and The Pinkertons.

The actor and film producer has been active in the industry since 1998. Martha MacIsaac has an estimated net worth of $500,000 as per the Celebrity Net Worth.

Who Is Martha MacIsaac’s Husband? Does She Have Children?

Superbad actress is a divorcee. At the moment, her relationship status is not clear as she has sealed her lips tightly after her divorce.

Previously, Martha MacIsaac was married to Torre Catalano (director of the video production for Capitol Records). The couple exchanged wedding rings on July 10, 2010.

After 5 years of their marriage, the duo split in 2015, however, the reason for their separation is missing. Together, the pair has no children.