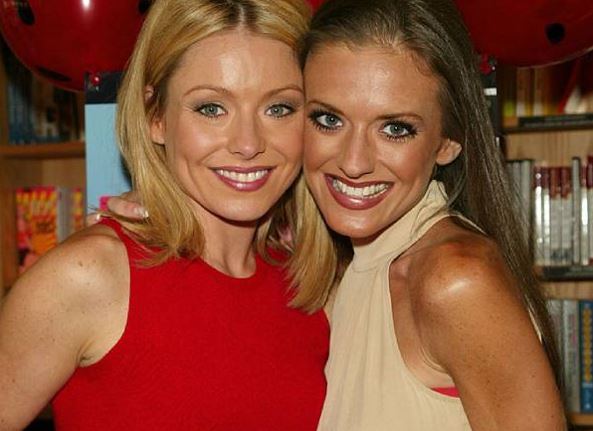 Linda Ripa is an American author who is also known to be the sister of Kelly Ripa, an American actress and TV personality.

Linda’s ender sister Kelly, a dancer, talk-show host, and television producer, who appears on television from Monday through Thursday at 9 AM as a co-host of morning talk show Live! with Kelly and Ryan with Ryan Seacrest.

Linda, who once was an actress and model, met with a tragedy two decades ago which changed her career path to be a children’s book author. So, what actually was the incident that changed Linda’s life? Go through the article to know everything about The Ladybug Blues’ author, including her family, career, relationship, and more.

Linda Ripa was born to Esther Ripa and Joseph Ripa, on December 3, 1968,  in Camden County, New Jersey. Her father, Joseph worked as a bus driver and was also a president of a labor union. An American national, Linda is a mix of Italian and Irish ancestry but was raised as Roman Catholic.

Her paternal grandfather, Giuseppe Ripa/Joseph and grandmother, were both  Italian, while her maternal grandmother Esther A. DiPretoro was born to Italian parents from Chieti, Abruzzo, in Pennsylvania.

As mentioned above, Linda’s elder sister Kelly is an American actress, dancer, and show host known for her role as Hayley Vaughan in the ABC soap opera All My Children. She also co-hosts  Live! with Kelly and Ryan.

Kelly is married to her husband, Mark Consuelos, who has also featured n several movies and TV series. The couple together has founded the production company named Milojo.

The Hope & Faith actress Kelly and her spouse Mark are the proud parents of 3 children.

Linda Ripa is probably single at the moment, raising her son as a single mother. As she has a very minimum appearance in media and interviews, Linda has always remained silent regarding her relationship and partners; however, she was once rumored to be engaged.

Linda’s rumored partner was a police officer in Camden County town, as reported in 1999. She was also reportedly seen wearing a dazzling diamond engagement ring until 23 August 2013. The author could probably be raising her son, Sergio-Giuseppe Ripa, born on September 8, 1999, on her own after a bitter split with her partner.

In 1999, when Linda was 7 months pregnant with her son, she met in a car accident. She was hit by a speeding drunk driver around Northeast Philadelphia while waiting for the traffic signal. She was admitted to Frankford Hospital, where the doctor reported that Linda had multiple broken bones and a crushed pelvis which pushed into her unborn son’s head.

Kelly’s nephew Sergio went into a coma and finally woke up after 4 weeks. Linda even refused anesthetics to treat her broken leg while her son was in a coma. Sergio was born 7 weeks premature on September 8, 1999.

She then named her son Miracle Baby. She later reported NY Post in 2002 about the incident and said:

“We don’t know how it happened, but it did and, of course, we call him Miracle Baby,”

Linda’s son is a fit and healthy grown man now and is aspiring to become a musician. However, he still has some breathing problems. On the other side, Linda had to go through multiple surgeries and was bedridden for around a year, during which her sister Kelly supported her a lot.

”It was the worst thing you could imagine. As much as I hurt from all the broken bones and operations, the worst thing was not really being able to hold my son for very long. Any mother would tell you that.”

The driver who hit Linda’s car with a minivan under the influence was six to twenty-four months in jail.

Why did Linda Ripa Sue The Orthopedic Surgeon?

Linda Ripa later filed a lawsuit against the orthopedic surgeon named Dr. Menachem Meller, who operated on her. She claimed that the doctor rushed into surgery without knowing the risks and improperly fixed her ankle.

She even had to discontinue her acting and modeling career and could not take a $150,000-a-year job as an assistant to her sister Kelly.

Lida was positive about the $2.4 million settlement with the doctor before the trial, which the doctor refused. She was later favored by the Philadelphia jury and was awarded $15 million from the surgeon.

Linda Ripa Net worth and Source of Income

The actress turned author currently makes money from her book sales. Her children’s books are quite famous among readers and reportedly earn well. She even made some money from movies in the past. However, she had to leave the industry after her accident.

Linda Ripa’s net worth is reportedly more than $15 million as she made $15 million alone from the lawsuit against the doctor. Besides, she also made huge money on her own. On the other hand, her sister Kelly is a popular TV host with a net worth of more than $120 Million.

The Ladybug Blues author is 5 feet 3 inches tall in height and weighs 50 kg. Her body measurement is 32-24-33 inches.