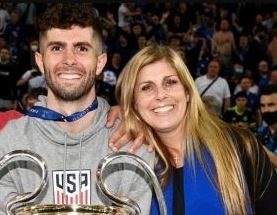 Kelley Pulisic is the mother of a famous American professional soccer player Christian Pulisic. He plays as an attacking midfielder or winger for Premier League club Chelsea and the United States national team.

Kelley is married to her husband Mark Pulisic for more than three decades. They have three children together, a daughter, Devyn Pulisic, and two sons named Christian Pulisic and Chase Gallant Pulisic.

His fans and other players call him “Captain America” because of his high level of play and his nationality. Let’s continue to read the article to know about Kelley’s childhood, family, parents, education, profession, net worth, married life, children, social media, height, weight, and other facts.

Kelley is the mother of a famous American soccer player. She was born and raised in Hershey, Pennsylvania, The United States of America. However, the details about her parents, siblings, and childhood is not disclosed.

She is reportedly in her mid-fifties.

Kelley seems to be a very private person when it comes to her life. She has not spoken about her life yet. Likewise, we have no information regarding Kelley’s education qualification, degrees, childhood days, etc.

But some sources claimed that, Kelley was very passionate about sports while growing up. She played soccer in her college days.

She might also have some siblings. But we have no knowledge of her family.

Pulisic rose to fame because of her son, who is one of the best soccer players.

She was also a teacher on exchange in England through the Fulbright Program. Pulisic lived for a year in Tackley, Oxfordshire

Kelley met her partner Mark Pulisic at a very young age. They have been together since high school.

She walked down the aisle with her husband, Mark in the mid-1990s. They both played collegiate soccer at George Mason University

Furthermore, Mark is an American former soccer forward who now is a professional football coach.

He played for George Mason Patriots from 1986 to 1989 and ended his career with thirty-five career goals in 73 appearances. In 2012, he was voted into the George Mason Men’s Soccer Hall of Fame.

Pulisic made his professional debut in 1991 with the National Professional Soccer League’s Harrisburg Heat (NPSL). Throughout his entire career, he played with the Heat before calling it quits in 1999.

The Heat gave him a Mark Pulisic Night at the Farm Show Arena in Harrisburg, Pennsylvania, as a retirement gift. After that, he was a member of the team’s Hall of Fame, alongside Todd Smith, Todd Lilley, and Richard Chinapoo.

Pulisic was hired by Lebanon Valley College in 1993 as the head coach until 2005. He also started coaching the school’s new women’s team program in 1996.

Pulisic worked as an assistant coach with the Harrisburg City Islanders of the USL in 2003 and 2004 while still at Lebanon Valley College.

Pulisic was appointed as the team’s first coach on April 19, 2006, when the Detroit Ignition joined the Major Indoor Soccer League (MISL). He received the MISL Coach of the Year award in April 2007.

He then started serving as a director of soccer operations in 2007 after his former teammate Bob Lilley was signed to the Ignition’s head coach position.

In early 2017, he returned to the United States, joining second division club Rochester Rhinos as an assistant coach under his former teammate and colleague Bob Lilley.

Kelley is a mother of three with her husband Mark. On 18 September 1998, the couple welcomed a beautiful baby boy and named him Christian Pulisic.

Their other son’s name is Chase Gallant Pulisic.

Furthermore, Mark and Kelley also share a Nephew, Will Pulisic, who is an American professional soccer player.

They also have two fur babies, a dog, and a cat.

Why is Christian Pulisic famous?

He played for the United States at under-15 and under-17 levels, before making his senior national team debut in March 2016 at age 17.

In February 2015, Borussia Dortmund signed Christian and assigned him first to their U17 squad and in summer 2015 to the U19.

After scoring 10 goals and assisting eight in just 15 games with the Dortmund youth teams, Pulisic then officially joined the first team over winter break.

He holds Croatian citizenship after moving to Germany in order to avoid applying for a German work visa, which is required to work in the country without a European Union passport.

Outside of soccer, Pulisic is a fan of the New York Jets, New York Rangers, and Philadelphia 76ers. He enjoys playing chess.

How rich is Kelley Pulisic?

The famous celebrity mother has revealed any information regarding her net worth or any sort of earnings. Her professional life is also not disclosed.

On the other hand, her son Christian is able to accumulate a total net worth of $10 million as of 2022.

Since Kelley is a very private person, she does not use any social media platforms.

Similarly, she also does not have a Wikipedia written about her.

On the other hand, you can find Christian Pulisic on Instagram as @cmpulisic. He has over 5.9 million followers on Instagram. Likewise, he follows over 360 different accounts. He is already verified on his Instagram account.

Some facts about Kelley Pulisic