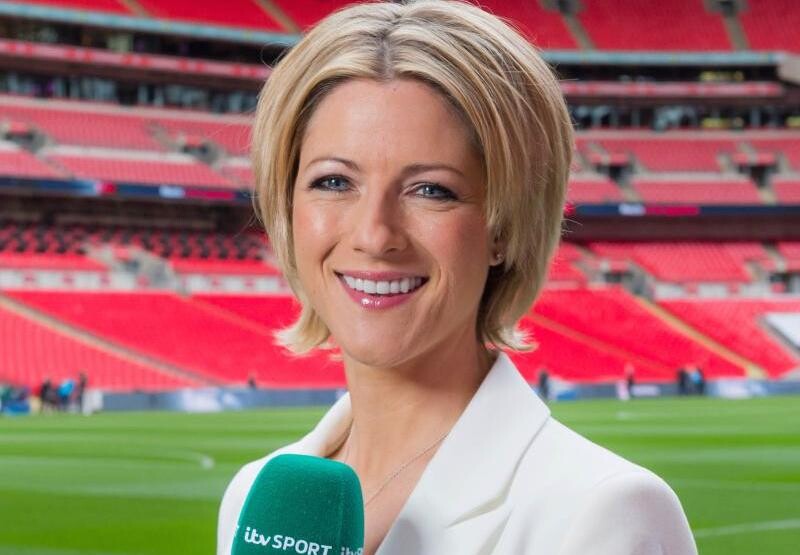 She is a sports presenter on Quest TV channel, covering the English Football League, and a podcast host for The Athletic. Let’s scroll the article till the end to know more about Jacqui’s personal details.

Jacqui Oatley was born in 1975 in Wolverhampton, West Midlands, England, to her late father, Gerald Arthur, and mother, Sonja Oatley.

Her father, Gerald, was the managing director of a large gas appliance company, and her mother, Sonja, is a retired nurse.

Sonja grew up in South Africa, where her parents were Norwegian missionaries.

Furthermore, Jacqui was raised in a Christian family alongside her brother and was a rally driver who twice won the Roof of Africa.

Oatley grew up loving to watch and play football and adores Wolverhampton Wanderers.

In Brewood, Staffordshire, she went to St Dominic’s Junior School, which was exclusively for girls.

Oatley graduated from the University of Leeds in 1996 with a degree in German after successfully completing her A-Levels at Wolverhampton Grammar School.

Likewise, she spent a year traveling the world and then moved to London to work in intellectual property as a Sales and Marketing Manager, then Key Account Manager.

Moreover, while playing amateur football for Chiswick Ladies Football Club, Oatley sustained a dislocated knee cap and ruptured ligaments, which resulted in a reconstruction operation and ten months of recovering on crutches.

Since 2005’s UEFA Women’s Euro and, most recently, fronting Euro 2016 and the 2018 FIFA World Cup for ITV Sport, she has anchored and commented on numerous major football tournaments and Olympic Games.

In 2007, she became the first female commentator on the flagship BBC One football highlights program Match of the Day.

She worked on-site at the 2019 FIFA Women’s World Cup in France as a live match commentator for the host broadcaster’s global TV feed.

She is an FA-qualified football coach, an ambassador for Women in Football, and a member of the Football Writers’ Association’s national committee.

She has also fronted World Football Focus for the BBC, The Football League Show, and Final Score, giving her a total of five broadcast roles on the program.

Oatley has been hosting live international PDC events for ITV Sport since 2015 as their darts anchor. She previously anchored ITV’s 2014 FA Cup highlights shows and presided over their coverage of the 2015 Africa Cup of Nations.

She hosted the BBC’s live coverage of women’s football, including the BBC Women’s Football Show, the UEFA Women’s Euro 2013, and the FIFA Women’s World Cup 2015.

Jacqui appeared as a studio guest pundit on the Guardian Football Weekly podcast and TV2 in Norway.

Her behind-the-scenes work promoting the employment of women in football and women’s football earned her the honor.

She then quit her job as an intellectual property manager and moved out of her apartment, spending the summer sleeping on friends’ floors while working full-time as a journalist.

At Sheffield Hallam University, she pursued a Postgraduate Diploma in Broadcast Journalism.

She began working as a sports reporter for BBC Radio Leeds while still a student and kept doing so after graduating.

Her first Unibond League game to be called was Wakefield & Emley vs. Worksop Town.

Because of her debut broadcast on 21 April 2007, Oatley became the first female football commentator in the history of the BBC football program Match of the Day.

She also appears regularly on Sky Sports programming, currently as a match reporter on Soccer Saturday, and has stand-in presented Goals on Sunday and Sunday Supplement.

Oatley is hired by US’s FOX Sports as the main commentator for the men’s FIFA World Cup 2022.

Jacqui Oatley’s Husband; Does she have Children?

In addition, Jacqui is in a happy marriage with her soulmate, Jamie.

There is no information regarding him whatsoever. Maybe the couple had been dating for some time before they married.

Likewise, Jamie is an event planner. He has planned various weddings. The couple seems to be very much in love and has raised a wonderful family together.

Jamie and Jacqui have two wonderful children together.

In 2011, Jacqui and James welcomed their first baby girl. They named her Pheobe, and she is now 11 years old.

Likewise, three years later, the couple also welcomed their second child together. They named him Max, and he is now 8 years old.

Jacqui Oatley’s Salary and Net worth

The sports broadcaster and football commentator has earned a net worth of $1.5 million as of 2022. Her annual salary could be around $50,0000.

Moreover, she earns an additional bonus from presenting the FIFA World Cup matches.

Her major source of income is from Football commentary, sports broadcasting, and a hosting career. She also earns from brand endorsements, commercials, social media promotion, etc.

Some facts about Jacqui Oatley