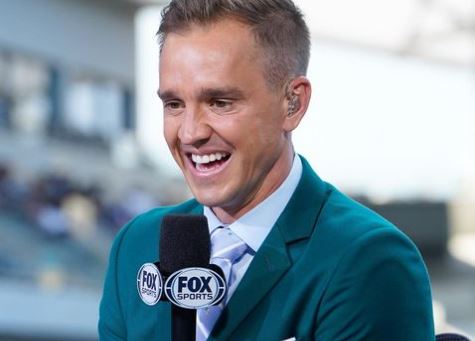 As a player, Stuart played in Major League Soccer with the Houston Dynamo and also in the Premier League for Bolton Wanderers.

Since retirement, he has started a career in broadcasting with ESPN and NBC and now works as a game analyst and host for Fox Sports. Likewise, he was also the lead color commentator of Fox Sports for the 2018 FIFA World Cup in Russia.

Fox Sports have recently announced the full 2022 FIFA World Cup commentator roster where Holden has been included as the play-by-play/match Analyst.

Read the article to know everything about Stuart also popular as a voice of soccer in North America. Is he married? Who is his wife?

Holden was born to Scottish parents on August 1, 1985, in Aberdeen, Scotland. He has Scottish ancestry.

His family shifted to the US when he was 10 and he grew up in Sugar Land, Texas. His parents are Moira Holden and Brian Holden.

His father, who worked for Chevron Corporation in its human resources department, died of cancer in 2009 after 6 years of battle.

Stuart’s mother lives in Houston. He has a brother and a sister. His brother Euan Holden is also a former footballer who played for League Two club Bury.

He holds an American nationality.

Having lived 10 years in Scotland, Stuart had a Scottish accent but has now developed a Houstonian accent.

Holden attended Awty International School and was part of the high school football team. He then joined Clemson University and also represented his college team.

After graduation, Stuart signed with the English club Sunderland in 2005 but could not represent the senior team due to injury.

He then played three years in the MLS for Houston Dynamo. In 2010, he signed with Bolton Wanderers and stayed with the team until 2014 but also played for Sheffield Wednesday on a loan in 2013.

Moreover, he even represented his national team at U20, U23, and senior levels.

After taking retirement from football in 2014, he started working as a journalist. He worked for ESPN and NBC in 2014.

Stuart signed with Fox Sports 1 in 2016. He was also the lead color commentator for the 2018 FIFA World Cup in Russia.

Likewise, he also worked as a lead studio analyst for Turner Sports and B/R Football.

Stuart Holden is also a businessman and owns the stakes in La Liga club RCD Mallorca. He has also been working hard to improve the club and frequently visits.

Who is Stuart Holden’s Wife?

The former American international is happily married to his wife Karalyn West, an American model.

The pair was engaged in March 2014 after dating for several years. They got married after a year in June 2015.

Stuart’s wife Karalyn is a model as well as a yoga instructor.

Stuart and Karalyn are blessed with two children. Their first child, a daughter named Kennady Rose was born in February 2016.

Their second child, a son Remington Brian Holden was born on June 22, 2022. The family of three now lives in Los Angeles.

Stuart Holden’s Net worth and Lifestyle

Stuart Holden has a net worth of around $5 Million as of 2022. He is a part owner of La Liga club Mallorca and owners stakes in the club.

Stuart earns around $50,000 approximately as an analyst from Fox Sports. Earlier as a player, he played in the top leagues and earned thousands of dollars in salary.

The former soccer player is on Instagram as @stuholden. He has more than 77k followers.