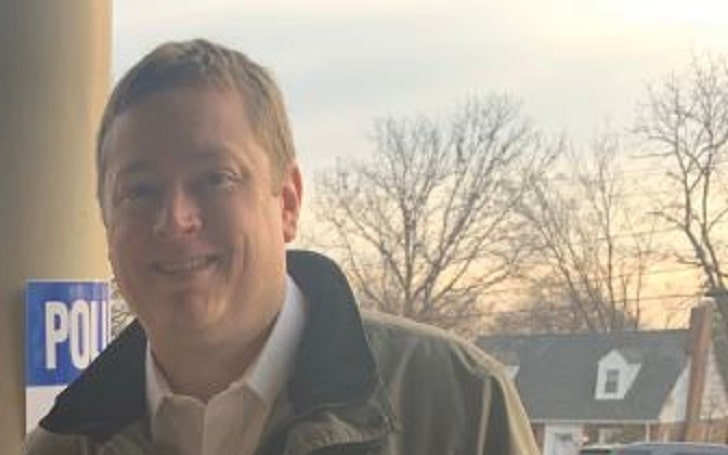 Gregory Mecher is a democratic political aide primarily recognized as the husband of an American political advisor, Jen Psaki. She is serving as the 34th and current White House press secretary. Besides, Mecher is an Ohio native married to Paski for more than a decade.

Mecher Bio: What Is His Age?

Gregory Mecher was born in Ohio, United States, in September 1976, making his age 45 years old now. He grew up in Ohio and studied at Elder High School, an all-boys Catholic prep school in Cincinnati. Besides, Mecher graduated with a degree in communications and television production from Northern Kentucky University in 1999.

Mecher’s mom taught 4th grade at a Catholic Elementary School in Cincinnati, while his father served as a mechanical engineer in Hebron, Kentucky.

Apart from that, his wife, Jen, was born in Stamford, Connecticut, the U.S., on December 1, 1978. Her full name is Jennifer Rene Psaki, whose age is 43 years old. She is the eldest daughter of three, and her parents are Eileen Medvey and Dimitrios “James” R. Psaki.

Moreover, Jen’s father is a retired real estate developer. Meanwhile, Jen has Polish ancestry who holds an American nationality like her husband.

What Is Gregory Mecher’s Occupation?

Mecher is a democratic political aide who worked as chief of staff to Congressman Steve Driehaus of Ohio and Rep. Joe Kennedy III of Massachusetts. He started his political vocation as a student, serving as the student representative to the Board of Regents before acquiring an internship with Kentucky Congressman Ken Lucas.

Furthermore, his wife, Jen, is a well-established politician who formerly served in the Obama administration as the White House deputy press secretary and many other positions. Between 2017 to 2020, she was a political contributor for CNN. Additionally, Psaki started her career in 2001 with the re-election operations of Iowa Democrats Tom Harkin for the U.S. Senate and Tom Vilsack for governor.

Mecher and Jen lead a happy married life for over a decade. The couple exchanged the wedding knot on May 8, 2010. Also, they are raising two children in Virginia. They kept their kids out of the limelight, but Psaki sometimes tweets about them.

Talking about the early relationship, the happy couple met each other because of their shared interest in politics. They served with the Democratic Congressional Campaign Committee when their ways first mingled in 2006. They often traveled together and later fell in love with each other.

During the time, they maintained a long-distance relationship and later tied the knot at the Woodlawn Farm in Ridge, Maryland. As per a report, A Protestant minister managed the ceremony.

How Rich Is Mecher? Net Worth Explored

Mecher has surely added a decent fortune to his name, but the actual amount is yet to get figured. Some of the sources show that he has a net worth of around $1 million. As a politician, he might be making a fair profit. Additionally, the average salary for Politician is $52,522 per year in the United States.

On the other hand, his life partner, Jen, is reportedly worth an estimated $2 million. The Sun reported that her salary as press secretary is thought to be around $183,000. Apart from that, the couple bought a three-bedroom townhouse near Georgetown University for $865,000 in 2013.