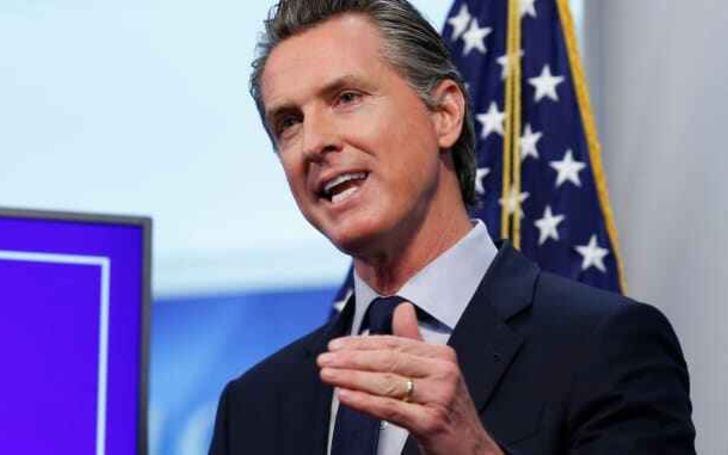 Gavin Christopher Newsom was born on October 10, 1967, in San Francisco, California, United States. He holds the American nationality and belongs to white ethnicity.

His father William Alfred Newsom III was an advocate and her mother Tessa Thomas was a housewife. He was raised along with sister Hilary Newsom in his hometown in California.

The 52 years old, Gavin Newsom married twice in his lifetime. He married a political analyst, attorney, and television news personality Kimberly Guilfoyle in 2001 at Saint Ignatius Catholic Church. However, their marriage did not long last and filed for divorce in January 2005 for a strain of a bi-coastal marriage. Their divorce was finalized on 28th February 2006.

Newsom has an affair with Ruby Rippy-Tourk in mid-2005. She was the wife of his campaign manager and former deputy chief of staff Alex Tourk. His affair gained popularity with male voters. The couple dated for sometimes and went their separate ways.

Then he dated film director Jennifer Siebel in September 2006. The following year, the couple announced their engagement in December. Newsom and his girlfriend took their wedding vows in July 2008 in Stevensville, Montana.

Gavin and his wife are blessed with three children. They welcomed their first child, son Hunter Siebel Newson on 12th June 2011, then daughter Brooklynn on 3rd July. The couple was blessed with third kid son Dutch on 26th February 2016.

The couple is now living a blissful life along with three children in Kentfield in Marin County.

Holds a Net Worth of Around $10 Million; Also Find His Career Details

Gavin Newson has collected a massive net worth from his career. According to Celebrity Net Worth, he has an estimated net worth of $10 million, as of 2020.  As being the governor of California, he has earned a salary of $201,680 per annum according to Business Insider.

Gavin Newson started his business venture with PlumpJack Associate L.P on 14th May 1991. The following year, he started the PlumpJack Winery with financial help with the help of his family friend Gordon Getty.

Just within two years, his enterprise grew up to more than 700 employees and opened PlumpJack Cafe Partner L.P. and one in Filmore Street in 1993. Just before becoming the mayor, he sold his part of the share in 2004.

On 8th January 2004, he became the 42nd Mayor of San Franciso. He gained media attention after he directed marriage licenses to same-sex couples. But it was annulled by the Supreme Court of Californian in August 2004.

One thought on “Who Is Gavin Newson ? Wife, Children, Kids, Net Worth, House, Divorce”