Dance Moms’ Melissa Gisoni- All About Husband and Daughters 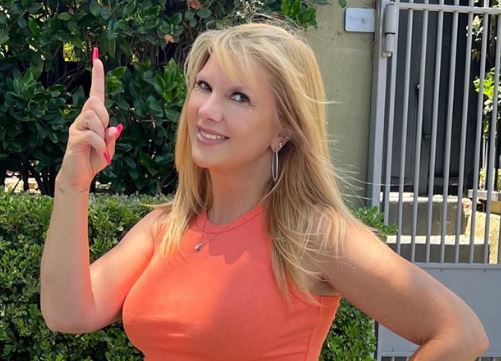 Melissa Gisoni born as Melissa Sulo is an American reality star and actress who participated in the Dance Moms with her daughters Maddie Ziegler and Mackenzie Ziegler.

She is married to Greg Gisoni since 2013 and has three children.

Her daughters Maddie and Mackenzie are dancers, TV stars, and actresses who gained fame through the Lifetime reality dance series Dance Moms.

Regrets not Going to College

She holds an American nationality. Her mother Bopcha died just before her TV series aired.

She was born in a middle-class family and could not complete her graduation. So, she always wanted her daughters to attend college.

Married Life with Kurt Ziegler: Why did they Divorce?

Their first child Maddie was born on September 30, 2002, and they welcomed their second daughter Mackenzie on June 4, 2004.

More than a decade after their wedding, they separated in 2011. However, the reason behind their separation is still undisclosed.

Then-Melissa Ziegler, the celebrity mom is the proud mother of her TV star daughters. Her older daughter Maddie is an American dancer and actress best known for competing in the Dance Moms from 2011 to 2016.

In 2014, she gained worldwide fame after appearing in the music video Sia’s “Chandelier”. Moreover, she has also toured with Sia and worked as a judge on So You Think You Can Dance: The Next Generation.

Her younger daughter Mackenzie is a dancer, TV star, actress, and singer who also appeared on the show Dance Moms with her mother and elder sister.

She has released albums titled Mack Z, Phases, etc. The other shows she appeared in are Nicky, Ricky, Dicky & Dawn, Total Eclipse etc.

They are of Polish, German and Italian descent.

The Dance Moms star married Greg Gisoni after her divorce from Kurt. They tied the knot in 2013 and are now married for around a decade.

Her current husband Greg is the Nuclear Services Vice President and Project Director at an energy center.

The couple doesn’t have children from their marriage.

From Greg’s past affair, Melissa also has two stepchildren; a stepson named Mathew Gisoni and a stepdaughter named Michelle Gisoni.

While still married to Kurt, Melissa and her then-husband filed for chapter seven bankruptcy in 2009.

However, the case was later terminated in 2010 after their elder daughter Maddie agreed to pay from the earnings she made from her music video ‘Sia’, ‘Elastic Heart’, and ‘Big Girls Cry’.

Melissa ran Custom Mortgages, Inc. with her former husband in the 2000s but the company went bankrupt. She then had a negative net worth.

Her daughters are among the highest-earning reality stars. They have earned a huge amount from their career.

Her elder daughter Maddie has a net worth of $5 Million while her younger daughter Mackenzie is worth $3 Million.

Melissa is a social media star and has millions of followers on Instagram. She reportedly earns money from social media posts and sponsorships.

The celebrity mom charges thousands of dollars per sponsored post.

Melissa along with her two daughters is very popular on social media with millions of followers. Her Instagram account @melissagisoni is followed by more than 3.7 million people.

She often shares photos with her male BFF on Instagram who is rumored to be gay. Her fans and followers assumed that she is dating her gay BFF which came to her notice.

She denied the rumors through an Insta post and revealed that she is still together with her husband. Melissa wrote:

For everyone that thinks I’m dating my gay BFF, here is a picture of me and my wonderful husband ❤️ that hates social media, hence the ❤️ on his face! 🤣