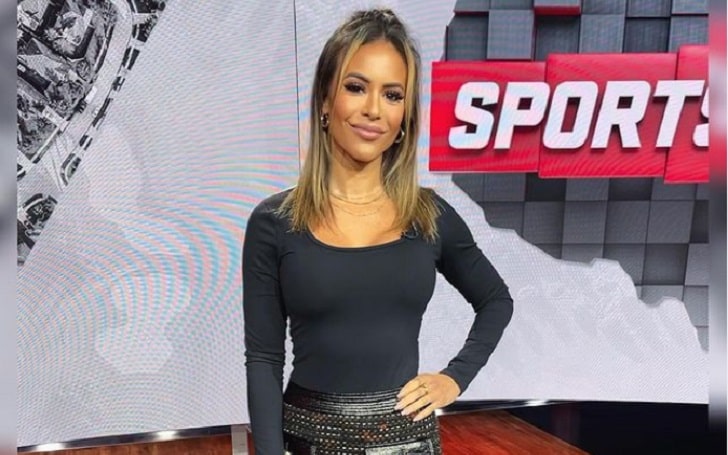 Charly Arnolt is a famous American sports broadcaster and television personality (like Petri Hawkins-Byrd) mostly known for her work on ESPN. Not only that, but the entertainment star also worked as a sportscaster and ring announcer with WWE from 2016 to 2021 under the ring name Charly Caruso. The established figure, Charly, has served in several roles as a reporter and has tried many journalism careers since 2010.

Born on July 14, 1987, Charly Arnolt was raised by her parents in Indianapolis, Indiana, the U.S. Her mother is Charlene May Arnolt, but her father’s details are unknown. Her mom was a speech pathologist, while her dad was a newspaper reporter. The 34 years old Journalist holds an American nationality and peaks at the height of 5 feet 2 inches.

From an early age, Charly developed a love for sports as a child. She used to play softball, volleyball, and gymnastics. Also, she aimed to compete in Olympics as a gymnast but retired from the sport due to injuries. The journalist attended North Central High School. After that, Arnolt enrolled at American University and, in 2010, graduated with a degree in Broadcast Journalism.

Begining Of Her Professional Career

After completing her education, Charly began her professional career by working as a news reporter with WSAZ-TV in West Virginia. Later, she went to WXIN Fox 59. And in 2011, Arnolt moved to WDAF-TV “Fox 4” in Kansas City, Missouri, where she served for about two years. In 2014, she again came as a sports reporter and anchor for WXIN.

Furthermore, the sports broadcaster not only has experience in news networks but also has an impressive portfolio in WWE. She made her debut in WWE in 2016. The sports broadcaster was very interested in working in WWE. After the vacant position was available, she auditioned and got the job. During that period, Arnolt also had a job as a sports anchor, but she chose to be at WWE.

Moreover, she took the ring name Charly Caruso and began her work as a ring announcer for WWE NXT. Her works can also be seen in USA Network, WWE, YouTube, WWE social media or WWE Network. Until 2021, she did backstage interviews on Monday Night RAW and WWE NXT. After that, Charly did not re-sign a new contract.

Currently, Charly works at ESPN. She is also identified for her work on the First Take, Her Take podcast on ESPN. Additionally, Arnolt regularly appears on SportsNation on ESPN+. The television personality has gained various experiences throughout her long-term career with her multiple works.

Charly Arnolt’s Boyfriend or Husband: Is She Married?

The ESPN Journalist is currently single and does not have a partner in her life. But the entertainment star was rumored to be in a romantic relationship with famous wrestler Seth Rollins. Their affair circulated when Rollins shared a photo with Arnolt on Twitter. However, it was just a rumor as there is no fact about it.

Arnolt is now busy with her schedule. And during her spare time, she loves spending time with her family. Undoubtedly, Arnolt will get a loving partner in the future, and she may announce her love life via Instagram, where we can follow her as @charlyontv.

What Is Her Salary and Net Worth?

The established personality in the field of journalism, Charly has surely added good fortune to her bank account. According to The Sun, Charly had a net worth of around $200,000 in 2019. Arnolt primarily earns most of her wealth from her profession as a sportscaster. Meanwhile, the average salary of a sportscaster in the U.S. range from $13,167 to $351,332, with a median salary of $62,740.

Exploring her Instagram account, we learned the host earns from advertisements and has worked with several brands. She has amassed over 840k followers on her Instagram handle. According to the Influencer Marketing Hub, Charly charges around $2,508.75 – $4,181.25 for a single sponsored post on I.G.