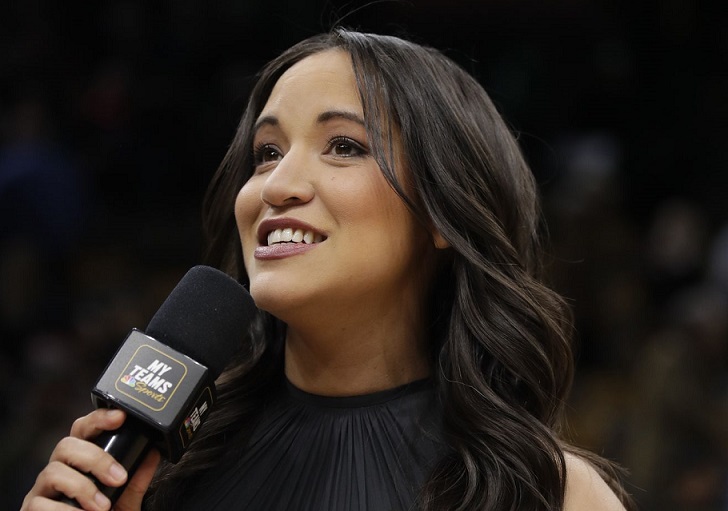 The American journalist Abby Chin currently serves as a sideline reporter for CSNNE, a regional sports network owned by the NBC Sports Group. The veteran media personality is also the Boston Celtics courtside reporter for NBC Sports Boston. She previously worked as a production assistant at ESPN.

Chin has two children with her husband Mike Schmidt.

Who Are Abby Chin Parents?

Abby Chin was born in 1980, in the United States of America. As fr as her nationality is concerned, Chin holds an American nationality and belongs to the mixed ethnical background.

Despite being a popular media personality, Chin has yet to share any info about her parents. But, sources reported that she has two sisters.

Is a University of Colorado Graduate

Abby Chin attended the University of Colorado and completed her BS in Broadcast Journalism from the college. She is an avid soccer player who widely played soccer in high school.

Around the same time, Chin was also involved in track & field.

Abby Chin Is a Sideline Reporter For ‘CSNNE’

The journalist Abby Chin currently serves as a sideline reporter for CSNNE. She joined the network back in 2013 as a Chevrolet SportsNet Central anchor and reporter.

Abby first kicked-off her courtside work covering the start of the 2013-14 Celtics season. She was also a ski jumping reporter at the 2018 Olympic Winter Games.

Since 2013, Abby Chin has served as the Boston Celtics courtside reporter for NBC Sports Boston. Some major tournaments Chin previously covered were the NBA’s Portland Trail Blazers, PAC-12 football for the Comcast SportsNet Northwest, Alabama, and Auburn’s national championship at CBS42 in Birmingham.

Chin once also worked as a production assistant at ESPN working on Monday Night Football.

How Much Abby Chin Net Worth?

Abby Chin owns $1 million net worth, as per estimation made by various online sources in 2020. The journalist has collected the majority of her wealth from her multiple roles in the media field. Chin’s annual salary is estimated from  $40000-50000k per year.

Sources also suggest that Abby currently resides in her house located in Boston, Massachusetts. But any financial details of the house are still missing.

Abby Chin has been in a happy marital relationship with her husband Mike Schmidt, a software engineer for years now. The couple never revealed when the first they came across. But sources reported the two started dating back in 2014 and dated for a while before they exchanged the vows.

They are also blessed with two children. Abby and spouse Mike welcomed their first child, a daughter Mabel on 24 December 2015.

Other Interesting Facts of Abby Chin