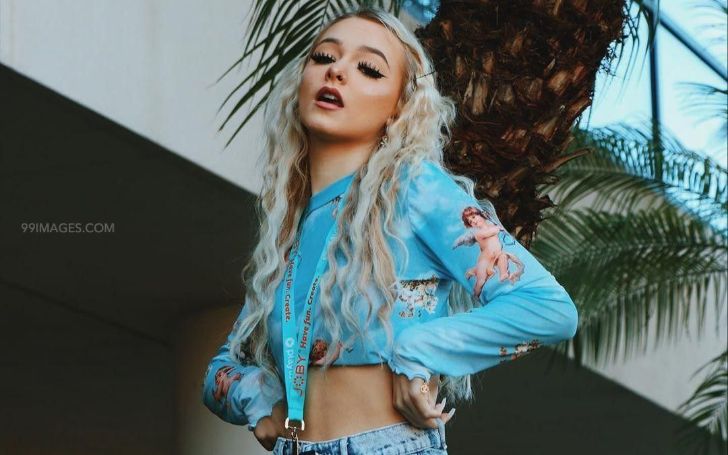 Zoe LaVerne is making waves with her videos on TikTok (@zoelaverne), and has become a viral sensation since the start of her career as a TikToker. With over 15 million followers on her TikTok profile as of May 2020, she has amassed a huge following from her talents.

LaVerne is hugely popular on other social media platforms too, in fact, has 2.5million subscribers on Instagram as of May 2020. She also has the coveted verified badge on TikTok.

What Is Zoe LaVerne’s Age?

After attending local elementary schools, she attended Franklin Community High School. Prior to this, she had moved to Franklin with her parents when she was 8 years old.

Who Is Zoe LaVerne’s Dating?

LaVerne’s boyfriend as of May 2020 is Cody Orlove. He is a popular Instagram influencer and they are seemingly serious as Zoe has put her TikTok bio as “codys girlfriend”.

She met Orlove on Instagram while stalking a friend and took a liking to him. They started talking and she found out that Cody was also a TikToker and had a huge following.

As a matter of fact, they exchanged their numbers because of this. Her boyfriend also has a huge following of 2.1 million followers on Instagram.

They started dating in 2017 and they have had an on-again-off-again relationship since. Before this, she had a boyfriend named Zephan Clark.

With over 15 million followers on Instagram as of May 2020. She has over 1.4 Billion likes and has more than 5700 uploads. According to InlfuencerMarketingHub, her account generates anywhere from $8,971 to $14,952 per post on the social media platform.

Similarly, she also has millions of followers on Instagram, and according to the same source her account generates $5,150.25 to $8,583.75 per post on the social media platform.

Zoe started her career as a TikToker in 2016 when she was only 15 years old since then she has become one of the biggest stars on the platform.

She frequently posts videos of lip syncs, comedy videos, and collaborations with various other stars of the platforms. Her friend Jessica Belkin is frequently seen on her channel. She and Terin Sottile collaborated and took over each other’s Instagram accounts for a day.

Started Posting On TikTok Because Of Bullying

Zoe first posted on the TikTok (then Musica.ly) because she was bullied intensely in high school. The bullying was so bad that she had to leave high school entirely and was home-schooled starting from 2018.

By her own accounts, she said

“I couldn’t walk down the halls without people making fun of me,” further adding “It’s simple; it was jealousy. But it hurt. People threatened to fight me all the time. I’d go to the counselor crying.”

In similar fashion, their channel earns anywhere from $314 to $5,000 per month according to SocialBlade. Their content mostly focuses on relationships and the activities they do as a couple like another channel Ashtyn&Jon, whose one-half is Ashtyn Sommer.