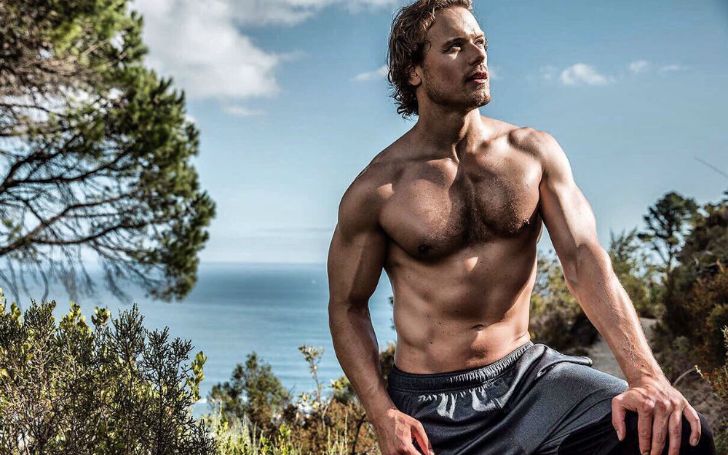 Sam Heughan, the full name Sam Roland Heughan, is a Scottish actor who was born on 30 April 1980.

He has appeared in many movies and TV shows but recently gained acclaim for his role as Jamie Fraser in Outlander.

Apart from his professional life, his love life has also been scrutinized over the years. Well, let’s discuss his career, childhood, and family details.

Born in Balmaclellan, Sam spent a big part of his childhood in his hometown itself. His mother Chrissie Heughan raised him and his brother as a single mother after his father abandoned them when he was 2.

But soon at the age of 5, he moved to New Galloway, where he finished his primary school education. Well, around this time, he has explained in several interviews that he spent his night in a convertible stable of Kenmure Castle.

He finished his graduation from the Royal Scottish Academy of Music and Drama (now the Royal Conservatoire of Scotland) in Glasgow. All this time, he participated in several plays and theatre activities and eventually developed his passion for acting.

How Old is Sam Heughan?

As we have already mentioned, Sam has been part of many movies and TV shows. He made his acting debut in a play by Scottish playwright David Grieg, Outlying Islands.

The premiere of the play was held in Edinburgh, Scotland, at the Traverse Theatre, after which it was moved to Royal Court Theatre in London.

He made his film debut in 2001 appearing in Small Moments. Thereafter, he portrayed several characters in many movies like A Very British Sex Scandal, Breaking the Mould, Young Alexander the Great, and First Light.

In 2020, he became part of Bloodshot, where he portrayed the character named Jimmy Dalton. Likewise, his other 2020 scheduled releases SAS: Red Notice, An Unquiet Life are in its post-production.

Talking of his TV works, he made his first TV appearance in 2004 with Island at War, which was followed by works in River City, Midsomer Murders, and Any Human Heart.

Moreover, he has been the lead character in one of the most successful TV shows Outlander, where he portrays the male lead, Jamie Fraser.

Is Sam Married? Girlfriends and Affairs

While there are several questions revolving around his love life, the actor is currently unmarried and has also not revealed his wedding plans yet.

However, he has onscreen chemistry with his girlfriend Caitriona Balfe in Outlander. Apart from his on-screen romance, he has stayed completely out of romance.

Well, as of 2022, it is safe to say that Sam is single and not dating anyone. However, we would love to see him tie the knot someday.

Sam got a lot of attention for his role in Outlander and was admired by many girls and celebrities. Recently in 2022, Sam revealed that several women have DM’d him including fellow actor Rita Wilson, who’s also known as Tom Hanks’ wife. He further said:

Rita Wilson, I think, was pretty good! Yeah, I met her on a show. I think [Outlander] has been very much a word-of-mouth thing, people do talk about it. It’s great, how popular it is—especially in America, it seems to be possibly more popular than other places.

How Much Is Sam Heughan’s Net Worth & Salary?

Sam owns a net worth of $5 million as of 2022. Besides, he also receives a good sum for his roles in the movies and TV shows.

Since 2014, Outlander has been the major source of his salary as he plays a lead role in the series.

One thought on “Sam Heughan”