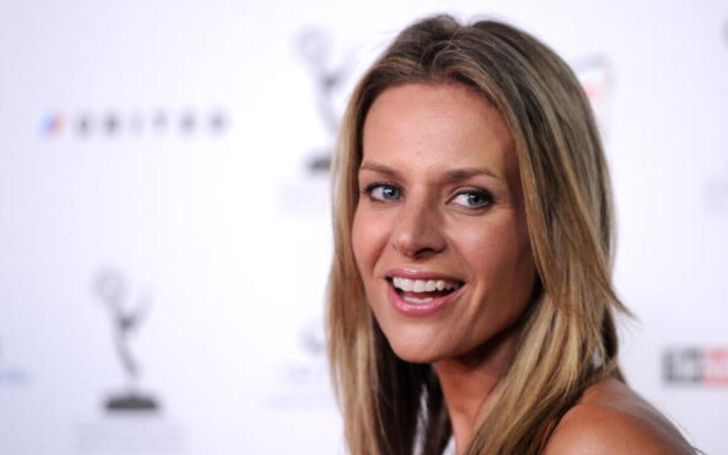 The award-winning /Canadian-actress, Jessalyn Gilsig has been working in the Hollywood industry since the 80s and still going on very sucessfully. She is famous for appearing on the TV series such as Glee, Boston Public, and Nip/Tuck.

The 47 years old, Jessalyn Gilsig is currently living her life single. But previously she was married to longtime boyfriend-turned-husband, Bobby Salomon. The duo shared the wedding vows in 2005 but it couldn’t last forever as they end up with divorce in 2010.

Since the divorce, she has not been romantically linked with any guy. Maybe she is hiding her relationship status or it can also be that she was to focus on her career rather than her relationship.

Jessalyn Gilsig was born under the birth sign, Sagittarius on November 30, 1971, in Montreal, Quebec, Canada to Claire and Toby Gilsig. Her full name is Jessalyn Sarah Gilsig. Her mother is a writer and translator while her father is an engineer.

So…regarding the #2008vs2018challenge challenge – I looked younger 10 years ago. But here’s a picture when I was around 12 with my mother. It was a beautiful day I remember. We were rocking our ‘80’s cuts and playing with make-up together. Just a sli… https://t.co/ezTxkA2WZg pic.twitter.com/n4jnGXUBDY — Jessalyn Gilsig (@JessalynGilsig) January 15, 2019

Regarding her education, she joined McGill University in Montreal. Before that, she has also received a Bachelors’s degree in English literature. Later on, she has attended Harvard University’s Institute of Advanced Theater Training.

Why Did She leave Vikings?

She was cast in the Vikings in season one in year 2012 however leaving in episode four of Vikings season three in 2015. While talking with Hollywood Reporter in 2015 she said that it was her idea for Siggy to be killed. Adding the statemt she said that,

I had some personal things in my life that I needed to be there for — some family things, which everybody has sometimes. So I approached [Vikings creator] Michael Hirst and said that it wasn’t going to be possible for me to continue living overseas in Ireland, and it was time for me to move on.

Net Worth and Salary

Jessalyn Gilsig who has contributed to the industry for more than three decades has a net worth of around $3 million. The average salary of the actor is around $50 thousand, so she also might be receiving her salary in the same range.