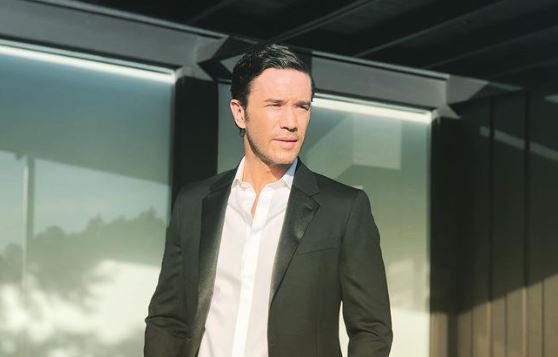 Tom Pelphrey is an American who gained popularity for his critically acclaimed role as Ben Davis in the Netflix original series Ozark. He also starred in the radio-television soap opera Guiding Light for which he received Daytime Emmy Award for Outstanding Younger Actor in a Drama Series.

Pelphrey’s other popular TV credits are Mick Dante in the CBS soap opera As the World Turns, Ward Meachum in the Netflix original series Iron Fist, and Kurt Bunker in the Cinemax television series Banshee.

Who is Tom Pelphrey’s Wife? (Relationship Rumors and Girlfriends)

The Ozark star is still unmarried but has recently started dating an American actress and producer Kaley Cuoco, the daughter of Layne Ann and Gary Carmine Cuoco.

They began their relationship in early 2022 and appeared together publicly at a Hollywood Walk of Fame ceremony in May 2022.

Moreover, he had several relationships in the past. He most recently dated Blindspot co-actor Jaimie Alexander. They met on the set of Blindspot in 2018 and dated until their split in 2020.

The couple even made their red carpet appearance together at the Entertainment Weekly & People’s New York 2018 Upfronts Celebration on May 14, 2018.

Tom and Jaimie even shared their intimate photos on Instagram but deleted them after their breakup. The former couple hasn’t talked about their separation and neither has shared any photos together which suggests that they are no longer together.

Prior to Jaimie, Pelphrey was in a relationship with his Banshee co-actor Lil Simmons who he met on the set in around 2015. Earlier, he was also reported to be dating Guiding Light co-star Gina Tognoni in 2005 who he also met on the set.

The couple were on news for some time due to their affair rumours but later separated. Gina is now married to Joseph Chiarello.

Moreover, he was also alleged to be dating a soap opera co-actress, Stephanie Gatschet.

How much is Tom Pelphrey’s Net worth? Know his Earnings from Movies and TV Shows

Tom Pelphrey is reported to be worth $10 Million as of 2022. Having starred in several movies and TV series, the American actor has earned millions of dollars in his career.

His debut role in the CBS soap opera Guiding Light was critically acclaimed and won an Emmy Award and also earned several other nominations. He earned a paycheck of thousands of dollars for her appearance in the series.

Besides, his other lead roles in the series As the World Turns and Banshee also earned him good revenue. Moreover, he also appeared in the 21 episodes of Iron Fist in which he earned $3000 per episode.

Pelphrey was born Thomas J. Pelphrey on July 28, 1982, in Howell, New Jersey, U.S. He is 39 years old currently. He holds an American nationality.

His parents are his father, Richard Pelphrey and his mother, Laurie Pelphrey. He also has a brother named Robert Pelphrey.

Tom completed his high school education at Howell High School in 2000 and later graduated with a Bachelor of Fine Arts degree from Rutgers University (Mason Gross School of the Arts) in 2004.

What is Tom Pelphrey’s Height?

Pelphrey’s height is 5 feet 7 inches and weighs around 85 kg.

Tom Pelphrey started his career appearing in Guiding Light in 2004. After some years, he started appearing in some episodes of TV series and in movies.

Since 2020, he has been starring in Ozark as Ben Davis. He is also a lead actor in Outer Range which will release in April 2022 alongside other stars like Tamara Podemski, Olive Abercrombie, Morningstar Angeline, Isabel Arraiza, etc.