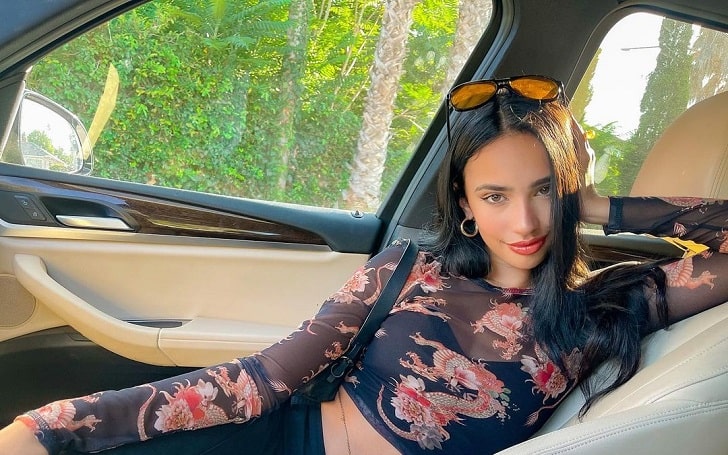 Multi-talented personality Kylie Cantrall is an American actress and singer who is currently a renowned YouTuber. She gained popularity for her role as Gabby Duran in Gabby Duran & The Unsittables. The talented figure has starred in numerous shows and series.

Kylie Cantrall was born in the United States of America on June 25, 2005. Her full name is Kylie Lorena Cantrall. She is 16 years old now. She grew up in Los Angeles, California, and had been interested in music from an early age.

Cantrall got exposure to the entertainment industry at a very young age. Gabby Duran & The Unsittables cast was raised by Carol Borjas (mother) and Alex Cantrall (father). She is of Venezuelan heritage and frequently visits family and friends in South America.

Similarly, her father is a music producer, and her mother is a talented dancer. The star kid’s family and parents have supported her since the beginning of her career.

The 5 feet 3 inches actress has also given several hit songs that many people loved.

The well-known actress has been engaged in the entertainment industry for a long time. She has been portrayed in various projects. She debuted on the big screen by starring in Fitty Smallz: Hamburger Fries & Shake.

Furthermore, Cantrall got into the spotlight when she appeared as Gabby Duran in the television series Gabby Duran & The Unsittables. In 2018, the actress appeared on Disney’s Bizaardvark and joined the popular web group, Team Choy.

Besides, Raven’s Home cast created a YouTube channel on May 1, 2014, and uploaded her first video on May 2, 2014. She has gathered more than 171k subscribers on her channel.

Moreover, Cantrall is strongly active on all the social media handles and has accumulated more than 1 million followers jointly.

Personal Life: Is She Single?

Yes, Bizaardvark actress is currently enjoying the single life and is still working to make her marvelous career. Apart from that, Cantrall is just 16 years old, which is pretty young to get involved in a romantic relationship.

On the other hand, she loves singing and dancing and shopping for vintage clothes during her spare time.

Net Worth Of Cantrall

Cantrall has amassed a decent fortune from her work as a singer, actress, and YouTube star. We can speculate her net worth to be between $500,000 to $1 million. She makes a good sum of money from YouTube.

Besides, Gabby Duran & The Unsittables alum has performed in numerous projects that have helped her acquire fair profit. Similarly, she is strongly active on Instagram and changes around $1,553.25 – $2,588.75 per post on IG.