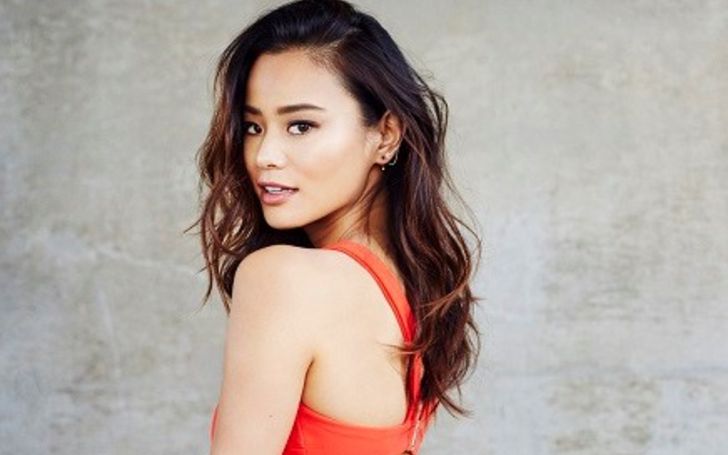 Jamie Jilynn Chung is an American actress, former reality television personality, and blogger who is known for her work in The Real World: San Diego, Real World/Road Rules Challenge, and Once Upon a Time.

Jamie Chung was born as Jamie Jilynn Chung on April 10, 1983, in San Francisco, California, the U.S. under the birth sign Aries. She is of American nationality while she belongs to mixed ethnicity(Korean American).

She was raised alongside her elder sister by her Korean parents who moved to the United States in the 1980s. Her parents use to run hamburger restaurant.

Talking about education, she went to Lowell High School from where she completed her schooling in 2001. After this, she joined the University of California from where she received a degree in Economics.

Jamie Chung Is Married: Find Who Is Her Husband?

The 37 years old, Jamie Chung is a married woman. She has shared the wedding vows with her longtime love Bryan Greenberg on October 31 2015 at the El Capitan Canyon resort in Santa Barbara, California.

As per the source, they shared their dating relationship in 2012 and got engaged in 2013. Her then boyfreind and now husband proposed to her by singing a song he wrote.

While talking about thier love staory once Jamie relved to US Weekly that,

[We met] like 10 years ago…But I was barely starting off, Bryan was working. We just so happened to recently work with the same producers — Scott Rosenberg, Andre Nemec, Josh Appelbaum — and they kept talking about this Bryan guy. I was like, ‘Who is this Bryan guy?’ I thought he was really cute, saw him around town, saw him once at a party and we hit it off. But it was very respectful and a conversation that lasted a little too long.

Adding the statement she said that,

And then we met each other in New York again, went on a date and then we didn’t talk for a year. And then we started dating in L.A. So it was kind of like a five-year process…It really was like missed opportunities, missed timings, different cities and then finally we ended up in the same city together.

As of now, the pair has completed five years of togetherness even after facing lots of ups and downs. Once they separated for around five days.

Jamie Chung has a net worth of $5 million as of 2021 as per the celebrity net worth. She started her career as a actor back in 2006 and has more than 60 acting credit in her name.

She made her acting debut after her appearance in the TV series named Veronica Mars. In 2007 she was cast in movies and series such as I Now Pronounce You Chuck & Larry, ER, Days of Our Lives, CSI: NY, Katrina, Greek.