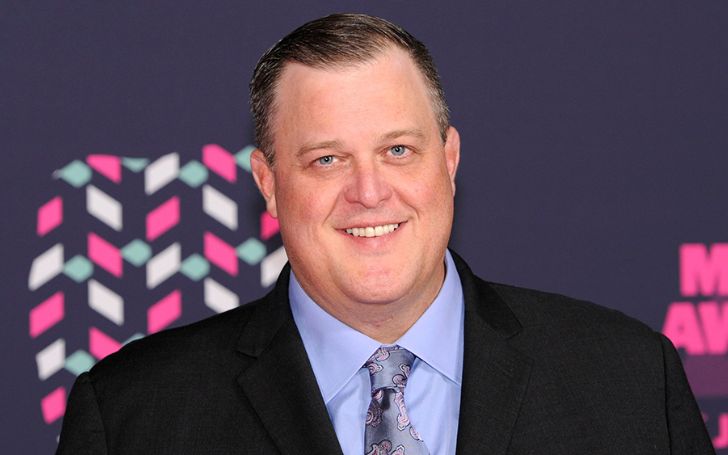 Billy Gardell is an American actor, and stand-up comedian who is known for playing a police officer, Mike Biggs in Mike & Molly. Similarly, Gardell who voiced Santa in Ice Age: A Mammoth Christmas has appeared in numerous TV series and movies like Yes, Dear, My Name Is Earl, and Once Upon a Time in Venice.

Who Is Billy Gardell’s Wife?

Billy Gardell is a married man. The stand-up comedian has been married to his wife Patty Knight since 2001. The couple tied the knot in a private ceremony and now are the parents of their only child.

They welcomed their son William III in 2003 who is 15-year-old as of 2018.  They have not disclosed to have any other children meanwhile. Despite the fact that Billy is happily married without divorce rumors, he keeps his personal life low profile.

Billy Gardell is a big fan of  Pittsburgh Steelers fan and is often seen in Terrible Towel waves with other Steeler fans at Heinz Field.

Gardell was born William Gardell on August 20, 1969, in  Swissvale, Pennsylvania, near Pittsburgh, to his parents William Gardell Sr. and Lary Gardell.  Gardell is American by nationality and is of white ethnicity. His zodiac sign is Leo featured with an action-oriented personality and driven by the desire to be loved and admired.

After his parents’ divorce, Billy Gardell moved to Florida with his mother, younger brother Brian Gardell and sister Lisa Gardell.

After the migration, the graduate of Winter Park High School, Billy started working at a department store warehouse at the age of 15 to support his family. He was a member of the International Thespian Society alongside his alumni  Amanda Bears who came out as a lesbian in 1993 and  Ben Rock.

Billy reportedly owns a house in Pittsburgh and a vintage 1969 Oldsmobile Cutlass Convertible but along with his further property detail, Gardell’s earnings from movies and salary detail of the Pennsylvania-born comedian is not disclosed.

It is alleged that his annual revenue is around a million dollar.  His movies Dragon Wars and You, Me and Dupree made the box office collection of $11.5 million and $75.7 million respectively.

For a fact, the average salary of a stand-up comedian in the United States is $20,000  a year while the highest-paid comedians like Jerry Seinfeld, Chris Rock,  and Louis C.K. earn about $69 million, $57 million, and $52 million a year.

Known as one of the best stand-up comedians, Billy commenced his career performing at a local comedy club in Florida at the age of 18.

Later in 2000, Billy Gardell got his breakthrough in his TV career through the American sitcom The King of Queens followed by his appearance in the TV series Judging Amy (2000), and It’s Like, You Know (2001) while his movie debut Avenging Angelo (2002) earned him wide recognization.

In 2006,  Billy released his first comedy album Billy Gardell: Throwback, and in 2011, he also released his stand-up special Halftime which aired on Comedy Central.

From 2015 to 2016, he hosted the lottery game show Monopoly Millionaires’ Club. As of 2018, after his TV series appearance in an episode of Young Sheldon (2018), the update on Billy’s current profession is yet to be disclosed.