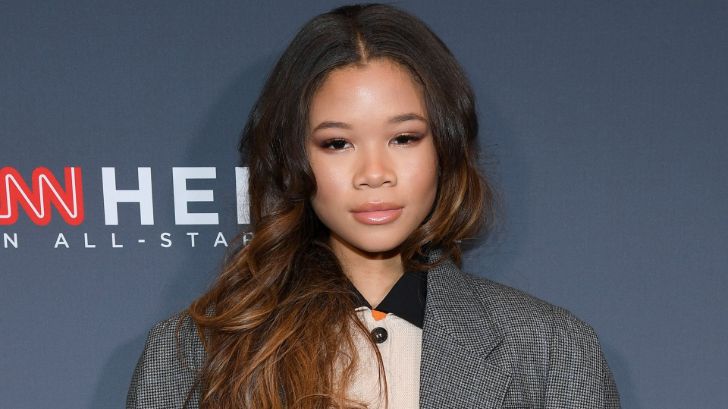 American actress Storm Reid is famous as Gia Bennett in Euphoria. Likewise, her other notable work includes 12 Years a Slave, When They See Us, The Invisible Man, and The Bravest Knight.

Storm Reid was born on July 1, 2003, in Atlanta, Georgia, the United States. Her parents are Rodney and Robyn Simpson Reid.

Strom is an American by nationality and belongs to the Afro-American ethnicity. She grew up with her siblings, Josh, Iman, and Paris.

Strom Reid was interested in acting since her childhood. She was 9 years old when she moved to Los Angels to make her career in acting. Back in 2012, she made her debut with the TV film A Cross to Bear.

The following year, Reid came to the spotlight as Emily in the movie 12 Years a Slave. Then, she appeared in other films like Sleight, Lea to the Rescue, A Happening of Monumental Proportions, A Wrinkle in Time, Don’t Let Go, and The Invisible Man.

Additionally, her other notable acting credits include television shows such as The Thundermans, Adam DeVine’s House Party, NCIS: Los Angeles, Nicky, Ricky, Dicky & Dawn, Chicago P.D., and When They See Us. In 2019, she voiced the character, Nia, in an animated series The Bravest Knight.

Furthermore, Strom portrayed the role of Gia Bennett in the teen drama television series Euphoria (2019) alongside Zendaya, Eric Dane, Jacob Elordi, and Maude Apatow. Besides that, she has also appeared in the music video, Family Feud (Jay-Z feat. Beyoncé).

The Bravest Knight actress’ post-production acting credits are Killing Winston Jones, The Suicide Squad, and One Way. So far, she has altogether 28 acting credits under her name.

There is no doubt, she has gathered a decent sum from her career. As per reports, Strom Reid has an estimated net worth of $500,000 in 2021.

At the moment, Reid is single. She prefers living a low profile life. Due to her secretive nature, the details about her personal life are not available.

You can follow her on any social media platform to know more about her personal and professional life.

What is Strom Reid nationality?

She is an American citizen.

How old is Strom Reid?

What is Strom Reid net worth?