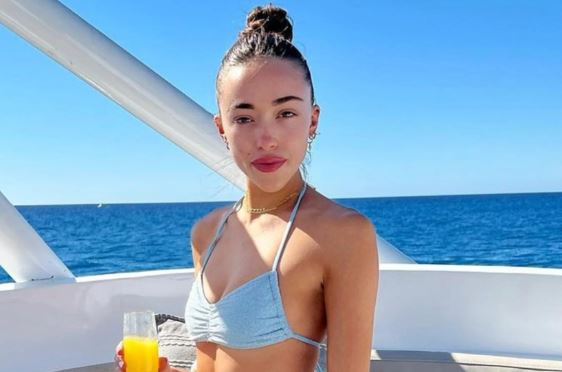 Sophia Culpo is an American model famous for being one of the Culpo sisters. She is the younger sister of Olivia Culpo.

So, let’s get to know more about Sophia’s personal life.

On November 15, 1996, Sophia was born in Rhode Island, the United States to her parents Susan Curran Culpo and Peter Culpo.

Her father Pete owns a restaurant. She has four siblings Olivia Culpo, Aurora Culpo, Pete Culpo, and Gus Culpo. In addition, she is the youngest among five siblings.

Sophia is a Boston University graduate who took a course related to nutrition.

Like Olivia, Sophia also followed in the footsteps of her sister and pursued a career as a model.

Likewise, her Instagram bio describes herself as “B.S Nutrition. I love food, it doesn’t love me. Gut health enthusiast who loves a good time and a cool pic.”

Sophia rose to fame in 2014 after her sister Olivia made her debut in the movie “The Other Woman” featuring Cameron Diaz.

Apart from modeling, Sophia is also a businesswoman. She sells various flavors of candles with her sister Aurora for $76 each.

Who is Olivia Culpo?

On May 8, 1992, Olivia was born in Cranston, Rhode Island, to her parents Susan and Peter Culpo. Olivia is a middle child, she has two elder siblings and two younger siblings.

Furthermore, she spent two summers in Brevard, North Carolina, attending the Brevard Music Center, and she has performed with the Boston Accompanietta.

At the 61st Miss Universe competition, which took place on December 19, 2012, in Las Vegas, Nevada, Culpo represented the United States.

Moreover, Culpo spent three weeks in Indonesia in January 2013 and assisted in announcing the Puteri Indonesia 2013 winner on February 1 in Jakarta. During her trip, she also went to Yogyakarta, Surabaya, and Bali.

She is now one of the casts of “Culpo Sisters”.

Who is Sophia dating right now?

Sophia is dating an American football wide receiver for the New York Jets of the National Football League, Braxton Berrios since late 2020.

However, their relationship was public on 2021’s Valentine’s Day

Braxton and Sophia keep sharing pictures of each other on their social media. According to some sources, the couple’s relationship will also be shown on the reality TV “Culpo Sisters”.

As a true freshman, Berrios participated and finished the year with 21 receptions for 232 yards and 3 touchdowns.

Berrios helped the Seminoles defeat Florida State for the first time since 2009 in 2017 by catching two touchdown passes.

The New England Patriots selected Berrios with the 210th overall pick in the sixth round of the 2018 NFL Draft. Berrios was placed on injured reserve on September 1, 2018.

When the New England Patriots defeated the Los Angeles Rams 13-3 in Super Bowl LIII, Berrios received a Super Bowl ring. On August 30, 2019, after the final roster cuts, he was released.

How rich is Sophia Culpo?

The famous social media personality has approximately a total net worth of $1 million to $2 million as of 2022. The major source of her income is her modeling career, social media, brand endorsements, sponsorships, etc.

On the other hand, Olivia can accumulate a total net worth of $7 million as of 2022.

Olivia rose to fame at the age of 20, when she took place in a beauty pageant.

Likewise, Sophia’s boyfriend Braxton has a total net worth of $2 million. His major source of income is his football career.

In addition, he agreed to a $2,578,408 deal with the Patriots. The specifics of his New York Jets deals are undisclosed for now.

Beautiful model Sophia is available on many social media platforms. On Instagram, you can find her as @sophiaculpo.

She is already verified as a celebrity on it. She has over 207 K followers and she follows over 1.1 K accounts that include her family, friends, athletes, actors, actresses, etc.

Likewise, her sister Olivia is also available on Instagram. You can find her on it as @oliviaculpo. She is already verified as a celebrity on Instagram.

Likewise, she has over 5.2 million followers and follows over 3.3 K different accounts.

On the other hand, You can find Braxton on Instagram as @braxtonberrios. He has over 139 K followers on it and follows over 650 different accounts as of 2022.

Some facts about Sophia Culpo