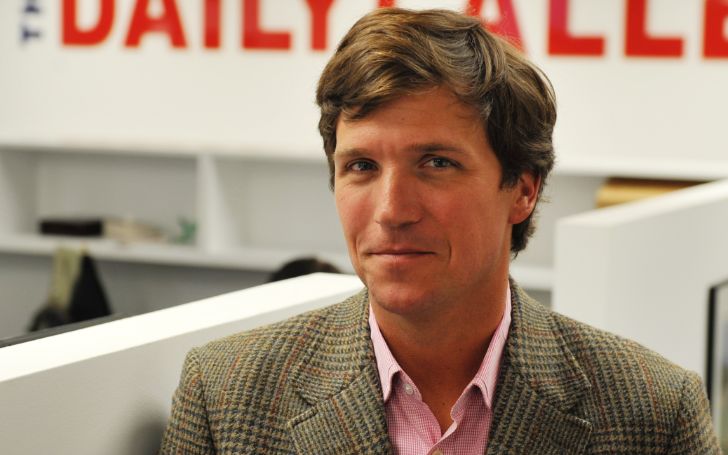 How Old is Tucker Carlson? What is His Height? Who are His Parents?

His parents separated in 1976 after which his father remarried heiress Patricia Caroline Swanson and raised Tucker and his brother, Buckley Peck Carlson, in La Jolla, California.

Tucker graduated from St. George’s School in  Middletown, Rhode Island, and pursued a Bachelor in Arts degree in history from Trinity College in Hartford, Connecticut.

Tucker is of Episcopalian denomination and considers himself a paleoconservative.

After his rejection into the CIA, Carlson pursued journalism at the behest of his father. He started his career as a fact-checker for the conservative journal, Policy Review.

Carlson then went on to work as a reporter for the Arkansas Democrat-Gazette and The Weekly Standard, and as a columnist for a litany of different magazines including New York, Reader’s Digest, Esquire, The New York Times Magazine, The Weekly Standard, The Daily Beast, and The New Republic.

He landed a gig with CNN from 2000 to 2005, as a right-wing commentator on shows like The Spin Room and Crossfire. Carlson left the channel in 2005, citing frustrations with the show’s liberal bias and stifling of conservative opinions.

He was hired by MSNBC in 2005 and began hosting The Situation With Tucker Carlson in June. During his tenure, he reported out of the Middle East, hosted MSNBC Special Report: Mideast Crisis, and was a panelist on Verdict with Dan Abrams. However, after his show was canceled on March 10, 2008, he soon resigned from the channel.

After a doomed run on the third season of Dancing with the Stars, Carlson joined Fox News Channel in May 2009. He made appearances on shows like Red Eye w/Greg Gutfeld, Special Report with Bret Baier, and Fox & Friends Weekend.

Tucker Carlson is also a prolific author who, besides authoring a memoir, Politicians, Partisans and Parasites: My Adventures in Cable News, has also written for the political news website, The Daily Caller.

Furthermore, he released his first book that wasn’t a memoir, Ship of Fools: How a Selfish Ruling Class is Bringing America to the Brink of Revolution in October 2018 — which debuted at #1 on The New York Times Best Seller list.

Is Tucker Carlson Married? Does He Have Children?

Tucker Carlson has been married since 1991 to his high-school sweetheart, Susan Andrews. They married at their high-school chapel.

What is Tucker Carlson’s Net Worth? His Fox News Salary?

According to celebritynetworth.com, Tucker Carlson has a net worth of $20 million. His net worth comes from his salary with Fox News Channel. A conservative political pundit, Carlson is a tenured member of the news channel since 2009 and since 2016, he has hosted the nightly political talk show, Tucker Carlson Tonight.

The show is one of the most popular and most-watched shows on Fox News. For his invaluable spot at Fox News, Tucker Carlson is reportedly paid $6 million in annual salary.