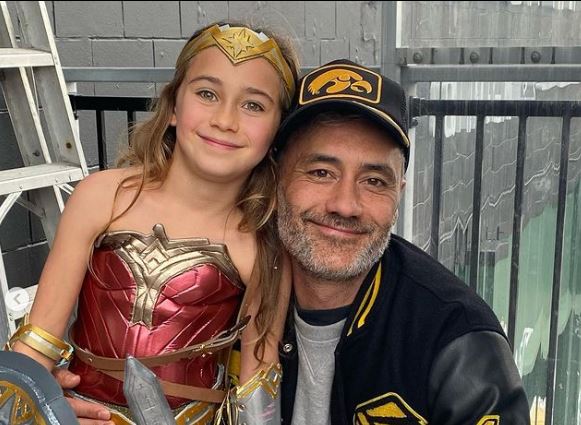 Hinekahu made her acting debut in the Marvel film and the fourth film in the “Thor” saga, Thor: Love and Thunder as Asgardian Kid.

She also has a younger sister Matewa Kiritapu, who is also a Marvel Cinematic actress. Te Hinekahu and Matewa Kiritapu both debuted in the Marvel film directed by their father.

Te Hinekāhu has been living her dream with support from her father and shares a special bond with him.

Hinekahu was born Te Kainga Hinekahu on May 20, 2012, to New Zealand parents Taika Waititi and Chelsea Winstanley. She was born in New Zealand and is 10 years old as of 2022.

Te has Te Whānau-ā-Apanui descent with “Māori and a little bit of French Canadian” ancestry “mixed with a bit of Irish” and other European ancestries from her father’s side while she has Ngāti Ranginui and Ngāi Te Rangi ancestry through her mother.

She also has a sister named Matewa Kiritapu, who is 3 years younger than her.

Her parents divorced when she was just 6 years old and is currently under joint custody of them.

Hinekahu has a very good relationship with her parents and both of them are raising her well despite their split. They frequently post Te and her sister’s photos on their social media and express their love.

On her 8th birthday on May 20, 2020, her father made a lovely wish through an Instagram post and wrote:

Happy Birthday, Te Kāinga o te Hinekāhu. Eight years ago you came into my life and changed everything. Stay humble, kōtiro, and remember where you come from and the power of your name. I love you as much as I love my Citroen BX16V. #HugLife #HouseOfTheSheHawk

On the same day, her mother Chelsea also took Instagram to wish her and wrote:

To my baby girl Te Hinekāhu Waititi who came into this world and blessed our lives 8yrs ago, thank you. Shine bright my love. Just like your little sister Matewa pointed out from @kidadajonesog book School Of Awake – “Mum! did you know we are made of the same material as stars?” Yes baby we are all connected with ‘tremendous power inside, just like the power of the stars’ – Kidada Jones. Here’s to growing girls who reach for the stars within.

At a young age, Te Hinekahu already followed in her father’s footsteps and made her acting debut in the Marvel film Thor: Love and Thunder as Asgardian Kid, which is directed by her father.

Her Parents’ Relationship Timeline: Why did they Divorce?

Her parents Taika Waititi and Chelsea Winstanley both are popular figures in New Zealand. Waititi, her father, is a filmmaker, actor, and comedian, while his mother is a film producer.

They probably met each other at film events or shows. While the information about their affair and relationship history is not available, the couple married in New York City in 2012.

The pair was married for 6 years during which they birthed two daughters Te Hinekāhu and Matewa Kiritapu.

Taika and Chelsea quietly separated in 2018.

Know about her Father Taika Waititi

Waititi is an Oscar-winning director and actor born as Taika David Cohen on 16 August 1975 (age 46) in Raukokore, Bay of Plenty, New Zealand.

His mother Robin Cohen is a painter and pedagogue of  Ashkenazi Jewish, Irish, Scottish and English descent. Taika has Maori ancestry with a trace of French-Canadian ancestry from his father’s side.

He was raised by his mother after his parents’ divorce and attended Onslow College. He earned a Bachelor of Arts degree from the Victoria University of Wellington.

Moreover, he has won Academy Award, a BAFTA Award, and a Grammy Award.

Who is her mother?

Te’s mother Chelsea Winstanley is a film producer from New Zealand. She worked as a producer with Te’s father in the horror mockumentary “What We Do in the Shadows” and the drama film “Jojo Rabbit,” in 2019.

Likewise, she is also a writer and director. She has also been a member of the Academy of Motion Picture Arts and Sciences.

Te Hinekahu’s father Taika Waititi recently tied the knot with singer Rita Ore in August 2022 in London. They started dating in March 2021 while filming a movie in Australia.

They first came public as a couple in August 2021 at “The Suicide Squad” premiere in Los Angeles, California.

The pair was engaged 2 months before in June and married secretly in August.

Prior to his marriage to Chelsea, Waititi was in a relationship with New Zealand actress and writer Loren Horsley for ten years.

Who is Te Hinekahu’s Mother dating?

Her mother Chelsea recently married her lesbian partner on July 10, 2022. She announced her marriage through her Instagram by sharing some photos of her wedding.

Besides, she is also a mother to a son who was born when she was only 20. She raised him as a single mother and is grown up now.