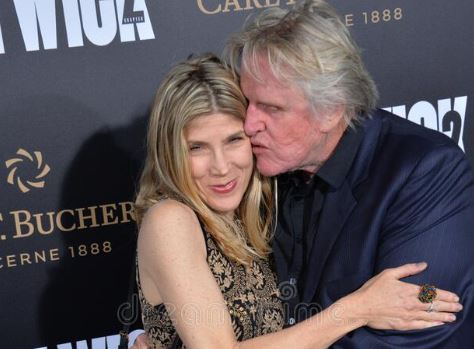 An American actress Steffanie Sampson is the fiance of American actor Gary Busey. They are together for more than a decade and also share a son named Luke.

Samson is also a stand-up comedian, hypnotherapist, and co-founder of the Busey Foundation For Children’s Kawasaki Disease.

She recently won the So You Think You Can Roast competition held at the world-famous Friar’s Club in New York City. She has also co-authored her husband’s book Buseyisms, Gary Busey’s Basic Instructions Before Leaving Earth.

The celebrity partner was interested in acting from the young age of 5. She and her sister Marnie used to act creating characters of their own. She later enrolled at the Stella Adler Academy in Hollywood to study acting.

How is Steffanie Sampson’s Relationship With Gary Busey

Steffanie and Gary have been dating each other for a very long time. The couple first met in 2008 when she was 34 while her partner Gary was 64.

Despite the 30 years of age difference, the couple had romantic feelings for each other and began their relationship.

She became pregnant with their first child in less than 2 years of relationship. Sampson and Busey became the parents of their son, Luke Sampson Busey, in February 2010.

Luke is now 12 years old and is a child actor. He currently stars as Jake in the 6th season of the TV series Bunk’d.

She has been engaged to her actor husband since 2019. They have not planned their wedding yet.

Gary Busey Married Twice; Who are his Ex-Wives?

The actor had two marriages in the past but none of them lasted for his whole life. He married his first wife Judy Helkenberg on December 30, 1968.

They share a son named William Jacob “Jake” Busey born in 1971. Popular as Jake Busey, Gary’s son is an American actor who has starred in the movies The Frighteners, Starship Troopers, Tomcats, Aiden, From Dusk till Dawn: The Series, and the Predator franchise.

His son Jake was born on June 15, 1971, in Los Angeles, California, U.S. He is in a relationship with April Hutchinson and has a daughter, Autumn.

Gary and his first wife Judy divorced after more than 2 decades in June 1990.

After that, Gary had an affair with stunt coordinator Tracy Hutchinson with whom he has a daughter named Alectra, born in 1994.

After splitting from Tracy, he tied the knot with actress Tiani Warden but separated after 5 years in 2001. The former couple had started together in Gary – The Chain, The Rage, and Plato’s Run.

Gary had no long-term affair since then until he met Steffanie in 2008.

Who is Gary Busey?

Busey is an American actor best known for starring in The Buddy Holly Story for which he was nominated for the Oscar award.

He was born on June 29, 1944, in Goose Creek, Texas, the U.S to his father Delmer Lloyd Busey and his mother Sadie Virginia (née Arnett). His father worked as a construction design manager.

Gary is also a drummer and has played for several bands. As an actor, he has appeared in hundreds of movies and TV series.

Besides being an actress, Steffanie is also a stand-up comedian, hypnotherapist, and author. She makes a good income with her multiple jobs and skills. Besides, she is also a winner of the reality TV show Friars Club: “So You Think You Can Roast?

Likewise, her fiance Gary is estimated to be worth about $500,000. He makes good earnings from movies and TV series.

Gary Busey was invited as a guest to the annual Monster Mania Convention held at the Doubletree Hotel in Cherry Hill, New Jersey. During the event, he was charged of criminal sexual contact.

Gary had to leave the place as soon as the complaint was done and was also removed from the guest list. The investigation is still going on.