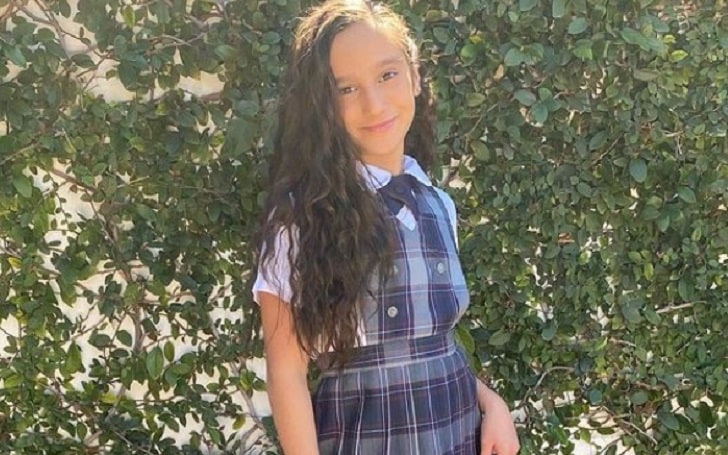 Gia Francesca Lopez is an American child actress who has emerged in the movies like Apparition and Jane the Virgin. But she gained wide recognition as the eldest daughter of Courtney Mazza and Mario Lopez. Both of his parents are established personalities in the showbiz industry. The eleven years old Gia has two younger brothers, Dominic and Santino Rafael Lopez.

Her father Mario is an American actor and host who gained popularity after appearing as A.C. Slater on Saved by the Bell, Saved by the Bell: The College Years and the 2020 sequel series. He has also hosted TV shows like America’s Best Dance Crew, Dancing with the Stars, The X Factor, etc.

Likewise, her mother Courtney is an actress and dancer known for her Broadway appearances. Her mother currently serves as a correspondent for Top Rank Boxing.

Gia Francesca Lopez was born on September 11, 2010, in Burbank, CA. She is eleven years old now. Her parents, Courtney Mazza and Mario Lopez raised her together with her younger brothers, Dominic and Santino.

“We are so overjoyed. What an amazing, wonderful and overwhelming experience to welcome our daughter into the world.”

Lopez told Extra after her birth.

Lopez is currently attending high school and is under her parents’ guidance. She often comes up on the Instagram handle of her father and mother. Apart from that, her mother, Courtney and her father, Mario, have an age gap of nine years.

As mentioned earlier, Gia’s parents are actors. The star kid followed in her parents’ footsteps. She has appeared in a few films and television series. Her debut came in 2012 after appearing in a short film The Disappointment of Jonathan Bender. At that time, she was just two years. In 2017, Lopez got into the spotlight after landing the role of Estrella in the television mini-series Elena of Avalor: Adventures in Vallestrella.

Gia played a part in the famous television series Jane the Virgin, which also stars Everly Carganilla, Jean Chatzky, and Diane Guerrero. The star kid has gained various experiences at such young age by working with such renowned figures. Apart from that, Lopez appeared in Walk the Prank, released in 2018. Also, she was a regular cast of Elena of Avalor from 2017 to 2020. Her latest work can be seen in the television movie, Holiday in Santa Fe, where Gia played the role of Frankie Ortega.

Some sites claim Gia is still in her 5th grade. One thing is sure the child actress is also currently focused on her education. Apart from that, Gia spends quality time with her mother and father. Also, she is close to her brothers. Meanwhile, Lopez often pops up with her father on his four-hour music program and a radio station, On With Mario Lopez.

As Gia is young, she does not have an official account on any social media platforms. But we can follow her father and mother from where they share pictures of Gia. Lopez made a guest appearance in The Kelly Clarkson Show and Extra with Billy Bush.

Her parents Mario and Courtney are married for around 8 years but have been together for around more than 14 years now. They first met in 2008 but married after dating for 4 years on December 1, 2012.

Gia was already 2 years old at the time of her parents’ wedding held in Punta Mita, Mexico. She was a flower girl in the ceremony.

Gia Francesca Lopez is still young, so her net worth is unknown. However, she has worked in more than five films and television series that must have helped her gain some profit.

Her father, Mario, has worked in numerous hit films. From his multiple profession as an actor, television host, and spokesman, Mario has a net worth of around $25 million. His annual salary for his duties on Extra is $6 million.