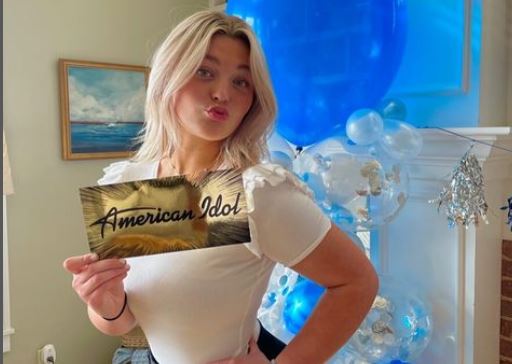 If you are watching American Idol 2022 then you must have seen Emyrson Flora rocking the stage with her melodious voice. The American singer made it to the top 24 of the reality series with her latest performance Kehlani’s “Honey”.

Whilst Emyrson is on the verge of becoming a great singer, people wish to know who the 16-year-old lady is. Know about her childhood, family, and personal life in this article.

Emyrson is a College Student

Emyrson Flora, who recently gained fame through American Idol’s stage, was born on August 8, 2005, in Hudson, New York. Her mother’s name is Autumn.

She belongs to the Caucasian white ethnicity and holds an American nationality.

After her primary, Emyrson is currently pursuing her higher education at Walsh Jesuit High School, the private Catholic High School in Cuyahoga Falls.

Flora began taking music classes when she was 10 and used to sing in front of her parents and friends.

In December 2021, she auditioned for the ABC reality show American Idol and received a golden ticket to Hollywood same as Zareh Isa. She was praised by the judges Luke Bryan, Katy Perry, and Lionel Richie for her performance of Adele’s “Love In The Dark” where she played piano too.

Emyrson recently performed Kehlani’s “Honey” which earned her a place in the Top 24.

The 16-year-old Idol is private about her love life. She is very young and in her college years. She could be in a secret relationship but hasn’t revealed her boyfriend.

She currently lives in Aurora.

The American Idol contender is active on Instagram @emyrsonflora where she has more than 8k followers. She is getting a lot of fame and could have huge followers in a short time.

Besides, she also has quite good followers on Facebook and Twitter. She is a Tiktoker with more than 11,000 followers on TikTok.

Emyrson’s mother Autumn brought her to the audition for American Idol. Her mother has been supporting her a lot in her music career and has always guided her since her childhood.

Her mother was so happy after Emyrson received the golden ticket and hugged her with happiness after the audition.