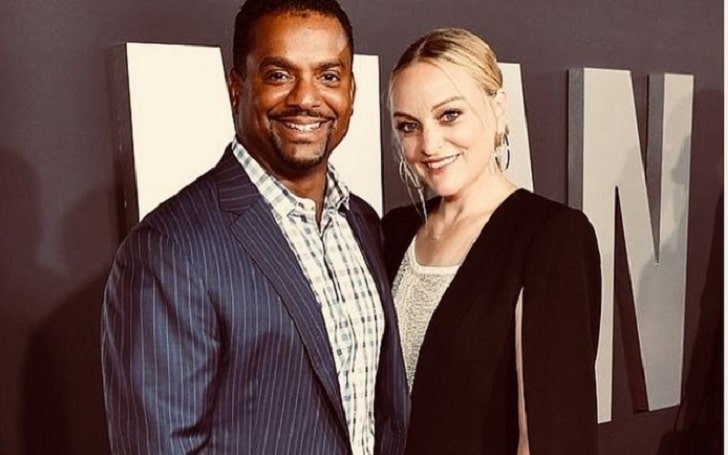 Angela Unkrich is an American writer and actress who starred as Alice in the short film, Para Verônica (For Her). Besides getting famous for her work, Unkrich got into the spotlight as the wife of Alfonso Ribeiro, the Image Award-winning actor, director, and writer. The 40 years old Unkrich and 50 years old Alfonso have been married for over a decade.

Angela Unkrich was born in 1981 in the Henry County City of Winfield, Iowa, in the United States. The 40 years aged actress celebrates her birthday on February 4 every year. She holds an American nationality and grew up on a farm alongside two brothers Tyson and Brendan Unkrich.

The writer attended Waco High School, where she also participated in diving as a sport. She was one of the skilled divers and received some honors, including the USA Diving State Championship. Unkrich’s parents are Valerie Sue Unkrich (mother) and Stanley Unkrich (father).

Unkrich made his big-screen debut in 2019 by appearing in Para Verônica (For Her). Unkrich holds a bachelor’s degree in Communication Studies from Northwestern University in Evanston. After graduating, Unkrich moved to Los Angeles, where she did several jobs, such as scriptwriter assistant. Not only that, she served as a diving coach and private jet hostess.

Likewise, Angela has experience in writing. Now, she is the author of My Mommyhood Tales. She has made several television appearances, including in the Home & Family, and I’m a Celebrity, Get Me Out of Here!. Apart from that, her husband, Alfonso, has more than 30 credits as an actor under his name. His notable roles can be seen in Lovewrecked, Are We There Yet? Extreme Ghostbusters and Spider-Man: The Animated Series. In Big Time Rush, he starred alongside Malese Jow and Carlos PenaVega.

America’s Funniest Home Videos host Alfonso and Para Verônica (For Her) star married in a sunset ceremony held in Los Angeles on October 13, 2012. The couple will celebrate their 10th anniversary this year. Alfonso and Angela first met at the Four Seasons Hotel in Beverly Hills, Los Angeles, in 2011.

The Shake It Up cast made the first move in their relationship, but some report shows Angela was not interested initially. They tied their wedding knot in a lavish ceremony where Fresh Prince co-star, Will Smith, was the groomsman.

Alfonso and Angela are the parents of three children. Their first child, Alfonso Lincoln Ribeiro Jr, was born on October 27, 2013, and their second son Anders Reyn was born on April 30, 2015. And on May 13, 2019, the family of four was increased to five after Ava Sue was born on May 13, 2019. Furthermore, the happy family of five lives in Los Angeles, the US.

Before Alfonso’s marriage with Angela, he was formerly married to Robin Stapler. They were married from January 2002 until August 2006. Besides, they also have a daughter, Sienna Ribeiro, born in October 2002.

How Much Is Angela Unkrich’s Net Worth In 2022?

As a writer, Angela might be earning a good sum of money. Some sources report her net worth of around $1 million to $5 million. Unkrich earns an abundant amount from her multiple profession. The actor has also starred in a film from where she must have received a decent profit. Not to mention, a writer in the United States has an average salary of $51831.

Likewise, an actress makes around $58,601, but it may fall between $48,301 and $71,601. So, Angela might have earned in the same range. Likewise, the celebrity spouse may acquire something from sponsorship and endorsement. According to the Influencer Marketing Hub, she takes around $204 – $340 for a single sponsored post on Instagram. Additionally, her husband has a tremendous fortune worth over $7 million.